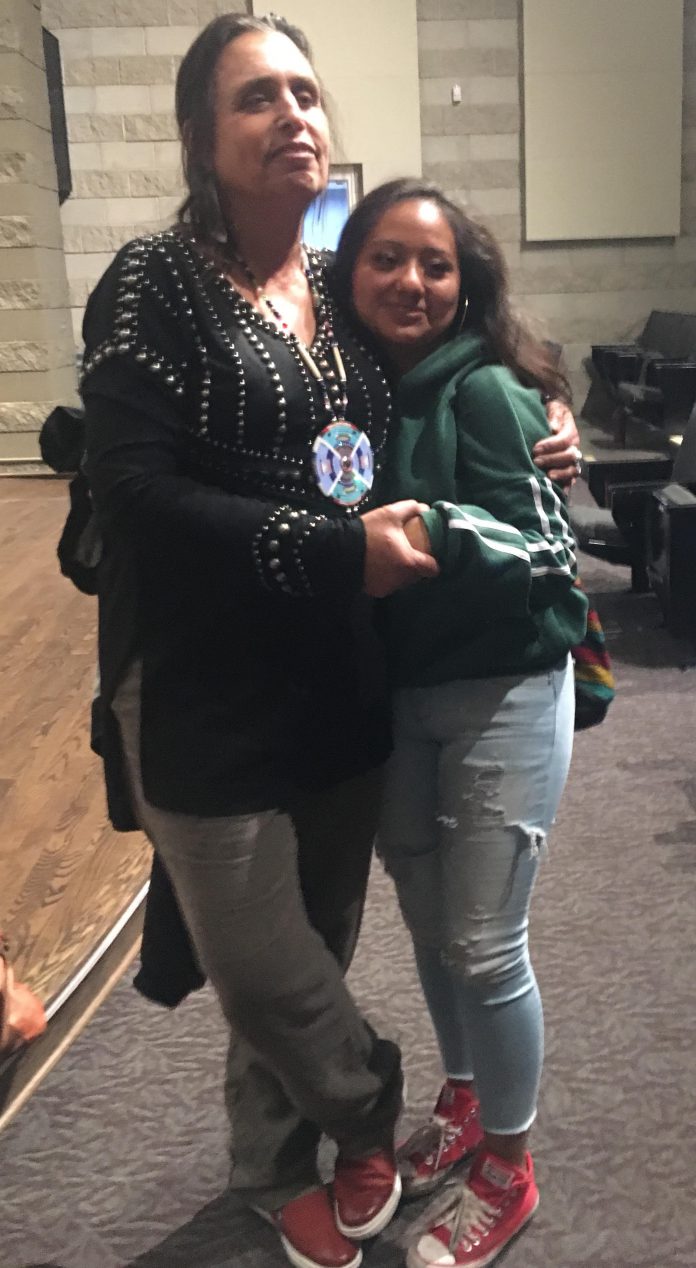 [Editor’s note: This is the first in a series that Tim Johnson is writing for the Community Reporter. His reflections are drawn from the 2019 Overcoming Racism Conference held at Metropolitan State University.]

The picture was striking, Winona LaDuke, Ojibwe leader, activist and author, embracing Jelly, a young Latinx woman, who had just finished a stirring spoken word presentation at the annual Overcoming Racism Conference held at Metropolitan State University this past November. Earlier that morning, Winona and Joe Feagin had given powerful Keynote presentations on the dynamics, history and firsthand experience of white supremacy. Joe, who is a professor and author of numerous books including The White Racial Frame, began the morning by unpacking the hidden history of white supremacy and the way it continues to be maintained. Winona spoke about the Deep North, naming the impact of white supremacy on Native Peoples and the natural world, as well as means of resistance. When Jelly’s turn arrived, she was clearly nervous, stepping to the center of the stage, taking several deep breaths before releasing the words to “America,” a strong witness by a young Dreamer to the sharp discrepancies between the so-called American dream and the omnipresence of white supremacy.

Winona’s embrace of Jelly was more than an act of affirmation from an elder in the racial justice struggle to a young person just discovering her voice. Winona’s embrace was most certainly an affirmation, but it was also an act of solidarity. Her embrace was a tangible and visual way of saying we are in this together, across generations, across our own distinctive backgrounds and life experience: we are in this struggle together.

Racism and white supremacy are so deeply ingrained into our corporate psychodynamics that they often feel overwhelming. Even if one recognizes that it is wrong to refuse bank loans, reject housing and employment applications, or pull someone over because of the color of their skin, individually it often feels like there is little or nothing we can do. This is why solidarity, working in community and through collaboration is so essential. Collaboration and community shatter the myth that there is nothing we can do and that these destructive dynamics must always be among us.

The embrace Winona offered to Jelly didn’t just suddenly happen one cold Friday morning in November. This act of solidarity was the culmination of collaborative efforts to address racism and white supremacy that began eleven years prior in the basement of Cherokee Park United Church. At the heart of the initial gathering of more than 100 people who spent two days together, was a belief that community and collaboration are essential if we are to make a difference.

The experience of that initial gathering was one of solidarity. To be sure, we were at different places in our understanding of white supremacy and racism. People of Color experience and understand these dynamics in ways that white folks can all too easily escape. Nonetheless, across the divides of generations and backgrounds, a solidarity emerged that by its very existence gave hope to those present.

It was out of this experience of solidarity that the Facilitating Racial Equity Collaborative (FREC: see overcomingracism.org) was born, an open and loose-knit coalition of individuals and organizations committed to overcoming racism. The mission of FREC is to work collaboratively and democratically toward just, equitable and antiracist communities throughout Minnesota. Building on the impulses of the first conference at Cherokee Park United Church, FREC has hosted ten annual overcoming racism conferences with more than 600 in attendance each year.

In 2019 the communities of Bemidji and Rochester sponsored satellite conferences, live-streaming the keynote presentations. In 2018 and 2019 FREC gave out grants of up to $2,000 for racial justice work in communities across the state. In addition, a one-day Leadership Institute is offered to schools and educators designed to address systemic ways in which racial inequity persists in educational systems. All of this is possible because of a commitment to collaboration, community building and the lived experience of solidarity.

There are many ways we are divided and encouraged to experience ourselves as separate from one another and the earth itself. Inevitably these divisions lead us into feelings of powerlessness, even despair. Solidarity,coalition building and community breaks through all of that, offering the tangible hope things can and will be different. Solidarity is the embrace so essential to the change for which we long.

[Editor’s postscript: We invite community members to contribute to this series. Please contact editor@comm.stpaulmedia.com or call 651-587-8859 to discuss possibilities.]