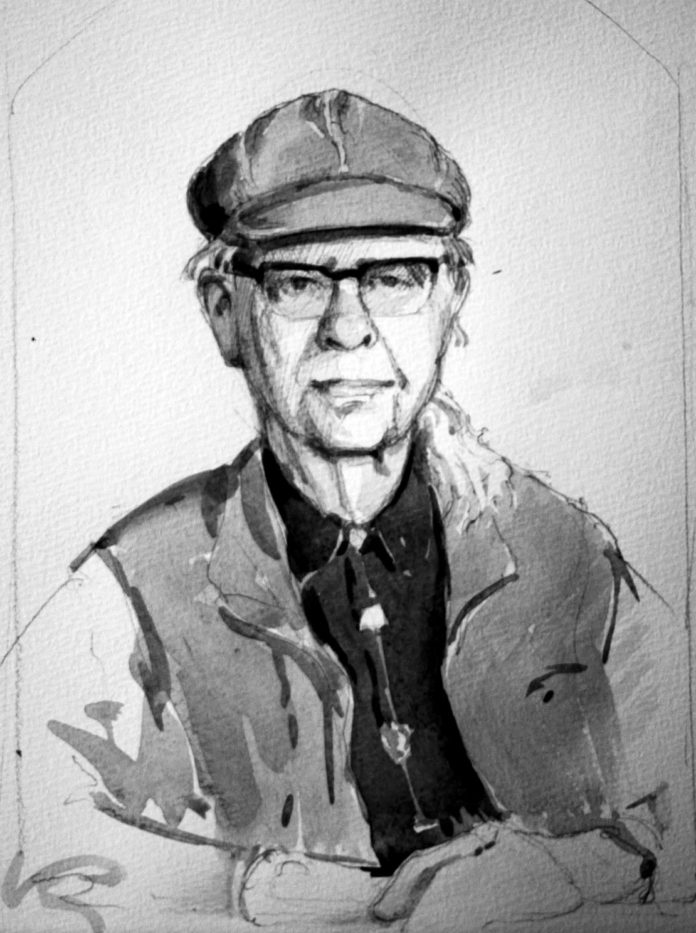 by David Lamb
For more than twelve years, Jerry Rothstein could most often be found somewhere between Cossetta’s and Sibley Plaza along West Seventh Street, a notebook in his pocket, looking for his next story—or else in the West Seventh Community Center office he used both for his newspaper work and his therapy practice.

“I wanted to make sure the print newspaper survived,” he said, reflecting on his efforts.

In the days since he stepped down as editor of the monthly nonprofit paper last year, one crosses paths with Rothstein in the same places throughout the West End, where, in the roles of treasurer and administrative director, he is on the same mission.

Publishing from the precipice
Sustaining the neighborhood newspaper was not easy in the era in which he oversaw it. Gone were the days of print’s dominance as a medium, when lucrative ads and pay-by-the-letter classifieds helped many newspaper budgets grow year after year. Rothstein began his tenure in 2008, as the effects of the worst financial crisis in nearly a century rippled through the economy. With some of the local businesses that advertised in the paper cutting back marketing spending in order to survive, the nonprofit newspaper, then 38 years old, teetered on the edge.

“We tried to keep showing the community why we were so important,” Rothstein said. “And there were a few months when we held our breath. But a bunch of our advertisers found ways to stick with us, and then, soon enough, the ones that had cut back when they needed to started asking to work with us again.”

Over the years that he edited the paper, Rothstein continued to build its engagement with readers and secure its financial footing. He continued the work that he saw his predecessor, Maxine McCormick, engaged in, featuring local artists and centering neighborhood perspectives in larger conversations. As he had observed in Oakland, CA, where Rothstein spent time as a community organizer in the 1960s, neighbors in the West End had incredible talents, ideas and cultural skills that were too often ignored by other local media.

“The neighborhood seemed to have a lot of the socioeconomic contrasts I was familiar with from Oakland,” he said, where the media’s focus on certain voices meant that those in particular neighborhoods were largely ignored. “There, it was the Oakland Hills, where the richest folks lived. Here, we have Highland, Summit, and Cathedral Hill—and then the flatlands of West Seventh, where so many hidden wonders get overlooked.”

He saw the work of featuring those wonders as another dimension of what he has done for decades as a therapist who specializes in gestalt, a school of psychology that emphasizes how the whole is greater than the sum of its parts. “The value of gestalt ideas in community work starts with being present with other people,” Rothstein said. “I think the solution to everything that’s going on right now also has to do with that.”
Soon after he started as editor, Rothstein made changes aimed at shoring up the paper’s business side. Soliciting competing bids from printers, he managed to add color pages to what was until then a black-and-white paper. Under the leadership of the Community Reporter’s board of directors, he also helped launch the website, communityreporter.org.

For about a decade, the institution stabilized. Then, in the spring of 2020, as Rothstein prepared to step into new roles at the organization, the pandemic descended on St. Paul. With local restaurants shut—and as a result not placing ads—the paper entered its greatest crisis yet. “This time was worse than 2008,” said Rothstein.

When the paper had to combine four issues into two, readers reminded us what the organization meant to them, some even donating money. And as restaurants and other St. Paul businesses found ways to reopen, often under new models geared to the pandemic, the ads to support the monthly issues returned just as they had twelve years before.

A new chapter
In the new roles he began last year as treasurer and administrative director, Rothstein oversees the day-to-day functioning of the nonprofit as well as its development strategy, which is currently focused on the paper’s upcoming 50th anniversary. He has solicited sponsors to celebrate the achievement and is working with a committee led by Margaret Kinney, a member of the Community Reporter’s board of directors, to organize an event around the milestone that brings the community together.

“There’s a never-ending supply of bureaucratic work to do,” Rothstein said. “And we’re only getting started.”

He has also turned his attention to a multimedia project, which brings together his disparate pursuits. “Gestalt has been at the foreground of everything I’ve done, from hospice and palliative care counseling to community organizing to the paper,” he said. “The questions it pushes you to ask yourself are about how you can be present where you are and about how you can fit into what is happening around you. With this project, I want to guide people through that journey.”