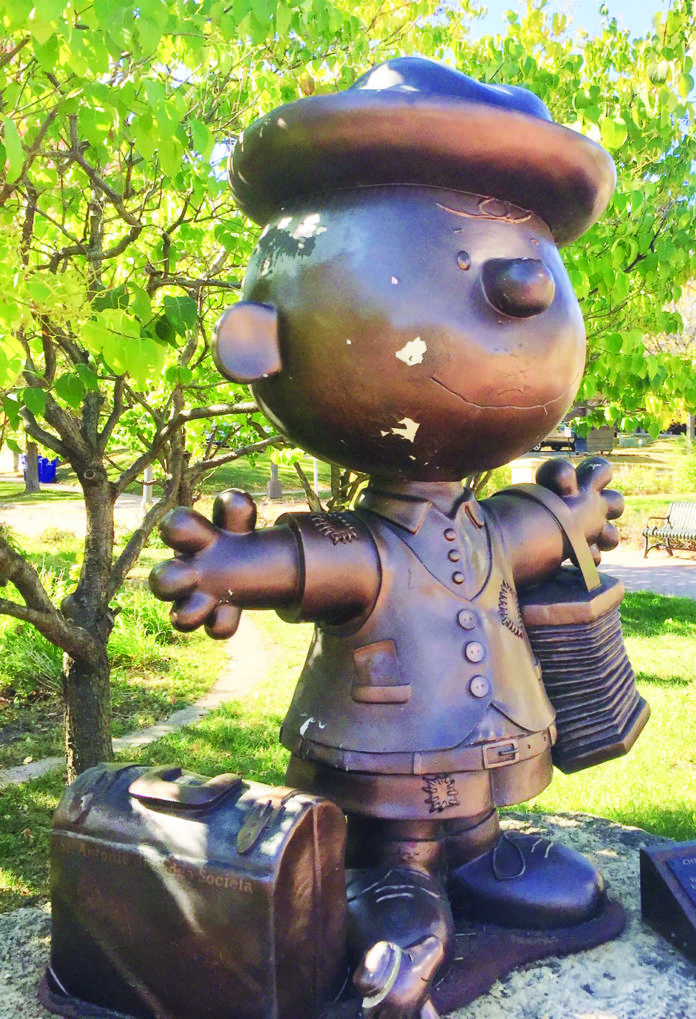 Editor’s Note: The Community Reporter is looking back on its first 50 years, finding some connections to the past and present, with thoughts towards the future. Here’s a sampling of what writer Margaret  Kinney found.
By Margaret Kinney

February 2000
Local historian Gary Brueggemann reported on the history of breweries in the West End in the article, This Neighborhood Could Be Called Brewerytown. In the mid-1800s, Melchoir Funk started Funk’s Brewery and its adjoining saloon at what is now Palace Avenue in between Duke and Colborne streets, producing 2,000 barrels of beer a year by 1880. It was sold only in kegs, and reportedly the neighborhood residents kept Funk’s in business.
Brueggemann wrote, “The success of Funk’s Brewery is somewhat remarkable given that it operated in the shadow of the large Stahlman-Schmidt Brewery, which was producing 40,000 barrels a year by 1880.” Funk’s closed in 1899, and what eventually became known as Schmidt Brewery went through many incarnations. The latest incarnation is represented by the Schmidt Artists Lofts, offering over 200 live-work spaces for artists.
The 1855 Schmidt building continues its brewery traditions with Clutch Brewery, in the Keg and Case Market since 2018. West End beer producers Bad Weather Brewing Company and Waldmann Brewery also continue to help make St. Paul a “brewerytown.”

January 2001
Community Reporter’s front-page story by Irvine Park resident Kurt Schwichtenberg talked about a $130 million “busway” being planned for the entire length of West 7th St. The first rapid busway transit project in the Twin Cities was on its way to getting an environmental impact statement. At that time, the Metropolitan Council was searching for a less expensive form of rapid transit than light rail and wanted to work with a citizens’ advisory committee, as well as county and city councils. The project would have required widening West 7th Street, narrowing its sidewalks, removing trees and making drastic changes to multiple residential communities. Schwichtenberg, board president of the Fort Road Federation at the time, represented many voices of residents who were opposed to the project. By 2002, due to a statewide economic downturn, the GSE controversy, (see October 2002 below) and lack of support by district representative Sandy Pappas and many local citizens, the project died.
Then, as late as 2013, federal and state monies were being allocated to improve West 7th’s Route 54 bus service by adding more bus stop shelters, off-board ticket machines and an more buses. Plans were in place to connect the West 7th bus line to the then unfinished Green Line. That project also fizzled out as developers’ ideas for a streetcar line began to grow. The Community Reporter regularly reports on this current scheme.
Since 1999, West End resident Diane Gerth has been following the numerous controversies surrounding the various “transportation improvement” ideas for West 7th Street. Referring to the proposed busway plan of 2002, Gerth says, “That idea of making West 7th Street a dedicated transportation corridor has never gone away.” Stay tuned to the Community Reporter for ongoing developments of the proposed streetcar plan.

October 2001
Then-editor Maxine McCormick reported on the John M. Armstrong House, a duplex built in 1886, which was being moved by the city of St. Paul to its present location on Eagle Parkway, across from the Science Museum of Minnesota. It took nine days and $2,375,000 to move and improve the building, which now contains three privately owned units. The Fort Road Federation assisted in funding part of its development.
October 2002
Reporter Shirlene Perrin wrote that the St. Paul City Council voted 6-0 to close the Gopher State Ethanol plant, then located in the Schmidt Brewery building. The City had been inundated with complaints related to increased odor and health issues that resulted from emissions from the plant. The Environmental Protection Agency filed a formal complaint due to emissions of significant quantities of volatile organic compounds and hazardous air pollutants.
West 7th citizens’ serious concerns about the plant began in the fall of 2000, when the plant (the only urban ethanol plant in the country) opened its ethanol production. It became clear that the plant had not followed city ordinances, which resulted in lawsuits, investigations by the Minnesota Pollution Control Agency and the Minnesota Dept. of Health. Litigation and resident protests against the GSE plant continued until May 2004 when the plant finally closed down.
Also in the October 2002 issue:
The bronze statue Charlie Brown on the Levee was dedicated to the Italian immigrants who for many decades had filled St. Paul’s Little Italy, a colony of residents located near the river between Chestnut Street and the High Bridge, beginning in the mid-1800s and continuing until 1965. The statue was commissioned by Dave Cossetta and Nick Mancini, whose families had emigrated from Italy and settled in St. Paul.

July 2004
Brueggemann commemorates the 150th anniversary of the City of St. Paul. Brueggemann was looking back 20 years to when he first began writing a series of articles about the role the Mississippi River played in shaping the West 7th Street community. He wrote, “Back in 1984, the river was clearly the ‘back door of town’. The local levee land was an eyesore of oil tanks, grain elevators, junk and scrap metal yards, sterile industrial buildings, cyclone fences, decaying concrete walls and an all-imposing high speed heavy truck highway hugging the river.” Brueggemann was celebrating the “reclaiming of the river,” by noting the absence of those eyesores and the addition of pedestrian-friendly and tree-lined Shepard Road, as well as bike paths and wooded parks. He called the West 7th Street neighborhood a “child of the Mississippi” and reminds us that we in the West End should “never forget its deep connection to America’s greatest river.”

Margaret Kinney is a West End visual artist and writer and a board member of the Community Reporter. She has lived in the West End since 2000.