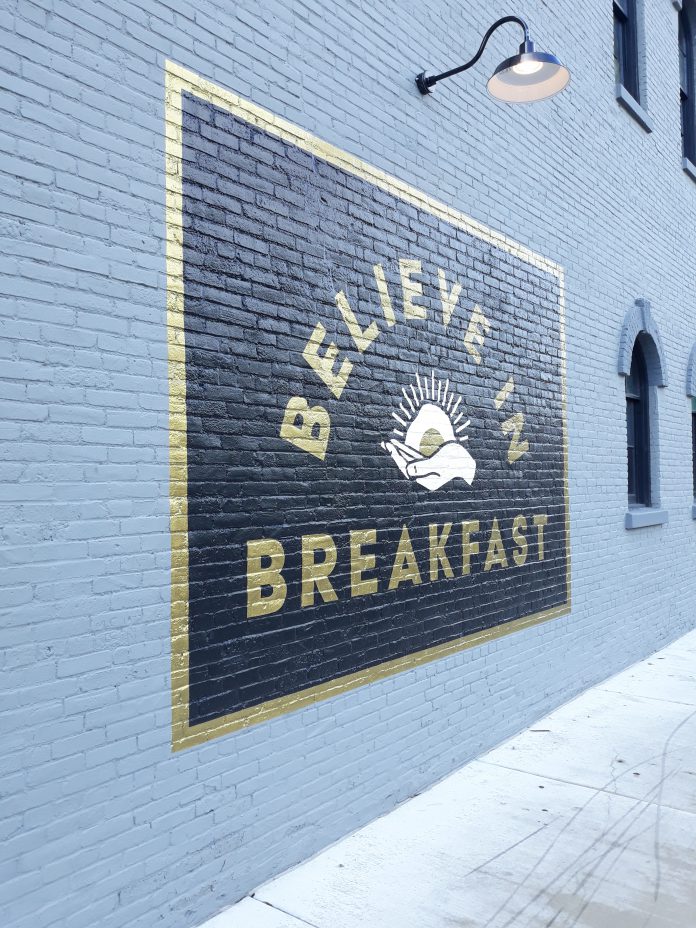 by Jerry Rothstein
Two years ago, we reported on our neighborhood’s refusal to accept the loss of one of St. Paul’s historic buildings:
“The Hope Engine Company No. 3 building was designed and built in 1871-72, and occupied for the first time in 1872. It is the oldest existing municipal building of any kind in the entire city of St. Paul and the station served the community until 1956, 85 years of active service. The building is structurally sound, and is considered a landmark in the neighborhood. It is eligible for listing on the National Register of Historic Places, and is also eligible for local historic designation by the Heritage Preservation Commission. The building is in a high state of preservation, with much of its original fabric intact.”
Now, Sarah and Brian Ingram are taking the saved, repaired and repurposed landmark into its new life as the Hope Breakfast Bar, an enterprise that is much more than its name implies.
Brian has been cooking all his life. At 14, in Alaska, he apprenticed with a master chef and went on to significant roles in the restaurant industry, including the creation of all the American locations for multi-Michelin-starred chef Alain Ducasse. He has created eateries for Brinker International and MGM Resorts, and at least one of his creations is in every state of the union. His more recent work on New Bohemia Wurst+BierHaus and the Seventh Street Truck Park brought him into St. Paul and thanks to his many connections in the industry, the fire hall “fell into our lap.”
Sarah, a Minnesota native, has devoted her life to giving, volunteering for causes she sees as vital, including The Cupcake Girls (thecupcakegirls.org), which provides a broad range of resources to those involved in the sex industry, and Zero: The End of Prostate Cancer (zerocancer.org).
Brian and Sarah complement each other, and they envision the resulting enterprise as a place compassionately concerned for the environment and the community, for guests and staff, and for supporting local resources.
Theirs is “a faithful approach,” recognizing that they were given an opportunity to do much more than a restaurant. The upper level of the Fire Hall, where the crews lived on shift, retaining its historic structure and surfaces, will be a welcoming, comfortable public space for working, socializing, having small meetings and scheduled events. This responds to Brian’s statement, “I have never seen a sense of community and receptivity to good enterprises like there is in West Seventh.”
In all the work and preparation of the site they have aimed to support local businesses and trades, as well as creating a unique menu that does not compete directly with other places in the area. Their breakfast theme leans on the savory possibilities of the first meal, which means that an all-day breakfast really is appropriate at lunch, dinner or any time in between. Still, vegetarian and vegan options will be fully available.
They are also intent on being part of and supporting the growing involvement of businesses to share their success with the wider world. They look to their suppliers to see whether they give back, and have pledged themselves to donate 3% of monthly profits to local causes.
As they prepared for a soft opening late in September, staff were in training and learning about the real mission behind this business. Brian and Sarah want working at Hope to be a different experience from many other service jobs.
Brian will be in the kitchen Sarah out front as the face of the business. But without their unity of purpose, there is no Hope Breakfast Bar.
Hope Breakfast Bar, 1 S. Leech St, St Paul (corner of Grand), 651-330-8996. Hours: Daily  6 a.m. to 1 a.m. Serving breakfast morning, noon & night.