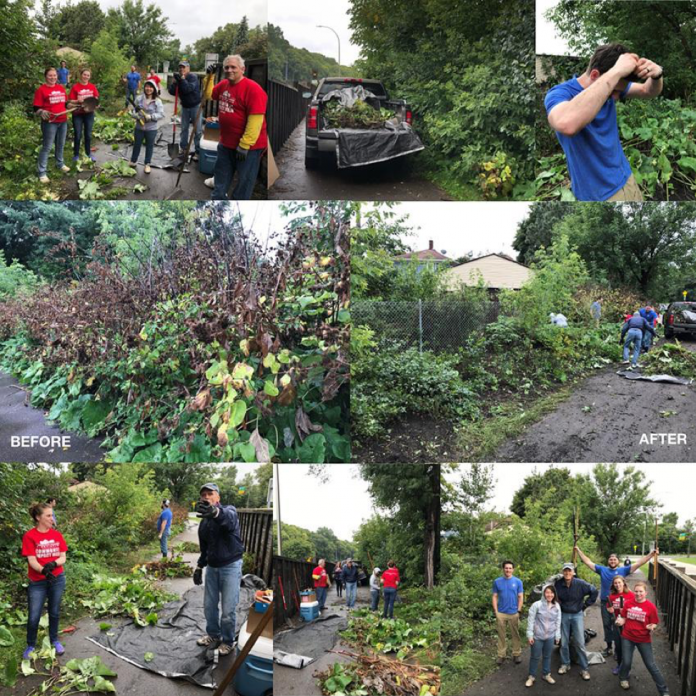 For the fourth year in a row, a group of BankCherokee (Bank) employees spent a September afternoon completing landscape clean-up around the walking path in Little Bohemia. This year, on Wednesday, September 11, it rained very hard in the morning and fortunately, it stopped in the early afternoon allowing sufficient time to make solid progress cutting out burdock and buckthorn.
Eight enthusiastic Bank employees worked the garden near the path’s entrance at St. Clair. The wet ground made pulling weeds easier than it would have been under more normal conditions. Numerous trips in a large pick-up truck filled with plant material and branches were made to the nearby Summit Hill Yard Waste Collection Site just up St. Clair on Pleasant Avenue.
The Bank typically has five or six volunteer projects during September each year and Little Bohemia has been a popular choice with the Bank’s millennial employees. They report they enjoy not only getting outdoors, but also the physical aspect of this volunteer commitment. They do not always know the difference between a flower and a weed, but they get wiser each year.
In its Community Impact Month, in addition to the work in Little Bohemia, Bank team members have been involved in community service with a popular shred event, the Jeremiah Program, Salvation Army food distribution, Douglas Park fall clean-up, St. Stan’s Fall Fiesta and a Keystone Community Services project.