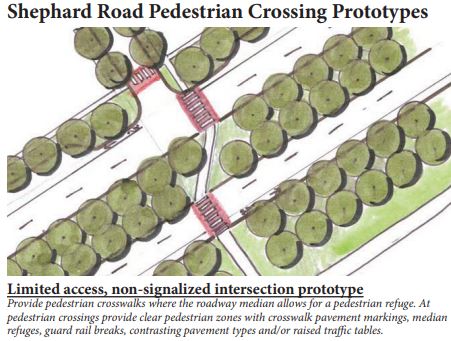 by Casey Ek
Kathy Carruth, the Highland District Council executive director, recalls standing alongside members of Mayor Melvin Carter’s office, St. Paul Police Department leadership and other civic leaders on March 15 looking for an answer to the question of whether the intersection of Shepard Road and Alton Street is safe or not on for pedestrians. It didn’t take long to get their answer.
“During the meeting, we witnessed multiple people crossing on Shepard (Road) and climbing over the metal barricade (on the south side of the roadway). It was unsafe and scary to see,” Carruth said.
But, a safer option for pedestrians crossing Shepard Road between Elway and Davern streets may be gaining some traction to the delight of the HDC and area residents, who have been pushing the project for over a decade.
Carruth recently submitted plans for a pedestrian crossing as part of the City of St. Paul’s open call for capital improvement projects, but Carruth pointed out that safe crossings of Shepard Road to the Mississippi River parklands, including Crosby Farm Park, on the south side of the roadway are outlined in both the Great River Passage Plan, a guiding document drafted in 2011 that outlines how the city should orient itself toward the Mississippi River, and the Shepard Davern Small Area Plan, drafted in 2013. The HDC’s most recent capital improvement proposal suggests either Madison Street or Alton Street as possible crossing points.
The proposed pedestrian crossings, Carruth said, would provide clear pedestrian zones with crosswalk pavement markings, median refuges, guard rail breaks, contrasting pavement types and/or raised traffic tables.
For the roughly 11,000 residents living between West 7th and Shepard Road in Highland Park, the project could mark significant quality of life improvements, according to Kathy Bell, who manages Sibley Manor Apartments, off Maynard Drive, where about 2000 people reside.
“If I had to guess, I would suggest that 95% of our community has never visited Hidden Falls Regional Park, Two Rivers Overlook, Fort Snelling Scenic Overlook, Crosby Farm Regional Park, Watergate Marina, or Crosby Farm Park. Nor have they walked the Crosby Farm Trail system or fished in Crosby Lake. What a shame this is,” Bell wrote in a letter of support for the pedestrian crossing project to city leaders. “These are all natural amenities that are only being used by those that drive to these locations or the few that are brave enough to cross Shepherd Road on foot. And with the soon to be added River Learning Center, there is no better time to open this up to those that live nearby.”
The pedestrian crossing plan was among 86 capital improvement project ideas submitted under the city’s umbrella effort of “crime prevention through environmental design.” The city was accepting formal project applications through March 27, at which point they fell under the Capital Improvement Committee’s review. The public will have a chance to weigh in on projects before applicants make their final presentations to the committee. The committee then makes their recommendations to the mayor.