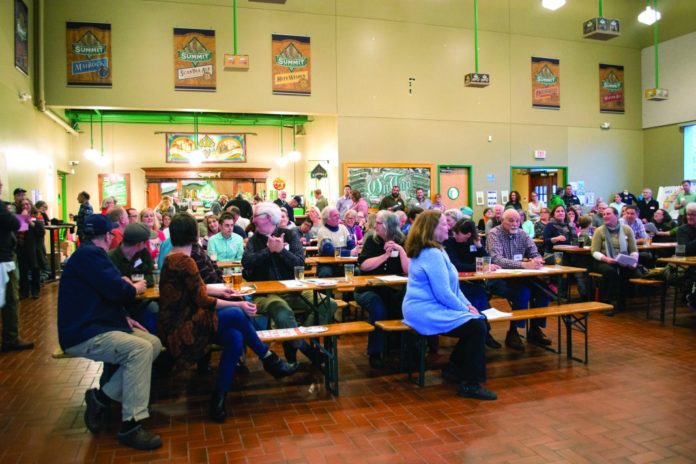 By Casey Ek
For the first time in over two years, the Fort Road Federation, the independent nonprofit district council representing the West 7th/Fort Road Neighborhood, will hold its annual meeting in person.   The meeting will take place at the Summit Brewing Ratskeller at 910 Montreal Circle, April 26 at 6 p.m.
Federation Executive Director Mary Cutrufello said the meeting will give the organization, which serves as a voice for the neighborhood and informs elected officials’ decisions, a chance to attract new members and said bringing community members to the table will be a key focus of this year’s meeting.
“One of the things we’re looking at is getting some new faces that are reflective of the neighborhood,” Cutrufello said. “We’ve got some folks who are interested, but we can always take more.”
The Fort Road Federation Board will elect a new president, first vice president, second vice president and treasurer at the meeting. These are at-large positions. Those unable to attend the April 26 meeting can vote online at fortroadfederation.org or in person at the Federation office, 882 West 7th St., Suite 6.
Additionally, one area coordinator position for each of the Federation’s three geographical areas is open. These must be filled by renters at this time, although a homeowner/business owner position may open in Area 1. Area coordinators are board members. Contact fortroadfed@fortroadfederation.org for more info.
The long-awaited Fort Road cookbook will also be for sale at this year’s meeting.
The public will also have a chance to interact with not only Fort Road Federation members but also several to-be-determined community leaders. One such leader who will be in attendance is Brooke Blakey
Blakey is the inaugural director of the new Office of Neighborhood Safety. She previously served as the chief of staff for Metro Transit. Mayor Melvin Carter appointed Blakey as part of his office’s efforts to advance its community-first public safety efforts.
Visitors will also get a chance to talk about community topics at one of several discussion tables set out at the event.
Cutrufello said the return to an in-person meeting not only signals a cautious return to normalcy, but it also means the Federation can hit the ground running this spring so long as neighbors are willing to get involved with the Federation.
“We’re a boots-on-the-ground organization, Cutrufello said. “We have a strong voice with the city council and elected officials that represent our neighborhood, but it’s not as strong if people don’t know who we are or what we do.”