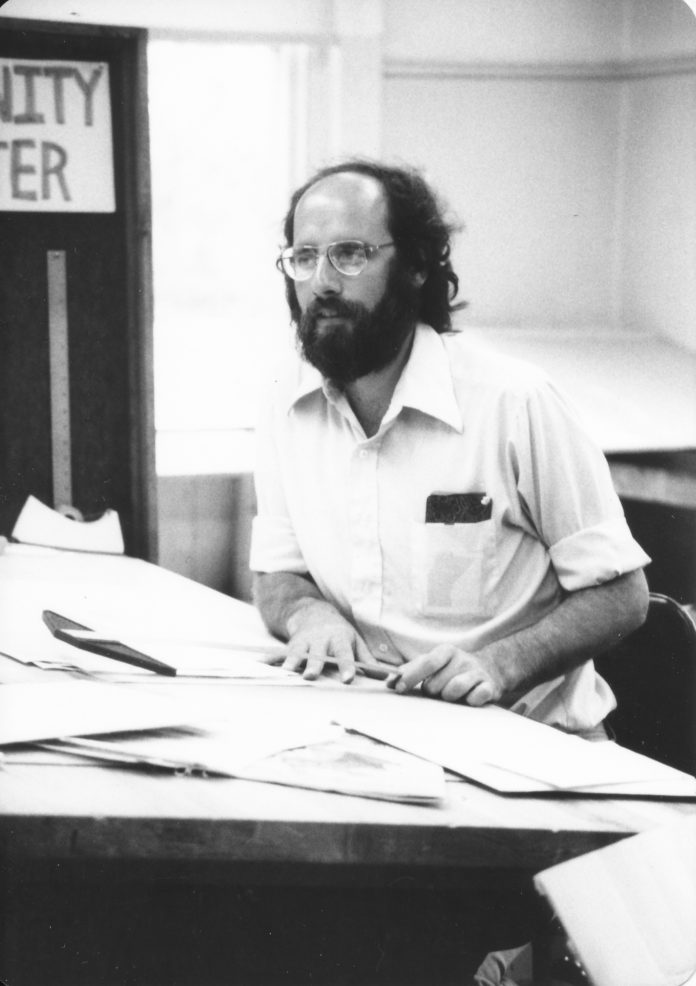 by Neal Gosman
About fifty years ago, the West 7th community was being invented.
The West End, built along the road from downtown to Fort Snelling was the oldest area of European-American settlement of what is now the city of St. Paul. Around 1838, Pigs Eye Parrant set up camp in Fountain Cave by the Mississippi River, downstream from the Fort – where the foot of Tuscarora Avenue would be if it reached that far today. His bootlegging operation had been banned from the military settlement.
At the other end of the West 7th community was Irvine Park, the oldest neighborhood stand of houses in the state – first platted in 1849 and with homes dating back to the 1850s.
By the early 1970s, the West End had become the site of a number of tightly defined, separately established neighborhoods – including communities of homeless people and other suffering souls. Strong roots to the area’s history remained in institutions such as the various churches, the CSPS Hall, and unions such as those representing the Schmidt Brewery, the Omaha railroad shops, and other craft workers – but many were facing challenges.
In 1970, the West 7th area was divided between two different state representatives. Even within the St. Paul government, it was fractured, with city council members then being elected city-wide rather than based on local Ward representation. Neighborhoods were defined as Jefferson and Adams, based on the existing elementary school boundaries. The hospital complex along Smith Avenue had not yet displaced the residential rooming houses. Seven Corners was still a viable small business district, the Xcel Center only on the drawing boards.
But the main determining boundary of what was to define “West 7th” was cut into the earth – the home-displacing roadbed of what became I-35E beginning in the 1960s. Once the neighborhoods were cleared and the trench cut open, West 7th became disconnected from the rest of St. Paul.
In 1967, LBJ’s Great Society came to St. Paul. The Ramsey County Citizens Committee on Economic Opportunity, thereafter Ramsey Action Programs (RAP)—and now called Community Action Partnership of Ramsey and Washington Counties—was set up as the local body to administer the federally funded anti-poverty program in St. Paul. It was controlled by a large voluntary board of directors which was mandated to include “citizen participation” from among the populations to be served.
That meant that one-third of the board had to be from among the “poor people” targeted by the programming. The concept of citizen participation was a value carried on from the days of the Progressive movement of the early 20th century.
RAP identified four “target areas” in St. Paul based on census identified low-income areas. The portion of West 7th inside the I-35E boundary was one of them.
A Target Area Advisory Council (TAAC) was set up and staffed at an old recreation building at the corner of what is now Smith and Grand. (The site is now part of the United Hospital campus.) This was the origin of the West Seventh Community Center, now part of Keystone. A number of federally funded staff and programs operated out of there. Some VISTA volunteers (so-called “domestic Peace Corps” workers) were based there. From 1970-’71, I was one of the VISTA volunteers.
I had just graduated from college back East, and the War on Poverty position gave me a temporary deferment from the military draft that would send me to fight a more violent war in Vietnam.
My role was to assist the anti-poverty, community development efforts happening in the West 7th target area. I put my time into a number of interlocking efforts of the era by many other people. Results of some of those early efforts can be seen in the community today: the West 7th Community Center, the Fort Road Federation, the United Family Medicine Clinic, the Oneida Education Center College Scholarship, the 45 mph speed limit on I-35E as well as the sound barriers along that road, and the Community Reporter newspaper.
From the seeds of the West 7th TAAC, planted in the rocky soil of the West End and cultivated by the sustained struggles for local control and citizen power over fifty years, we have connected this neighborhood as it has grown up.
A number of structural reforms cemented that community spirit: In 1972, Legislative District 65 was established to cover all of the West 7th. In 1975, the area was formally recognized as a planning district by the St. Paul District Council. In 1983 Ward 2 was established, allowing direct local representation on the City Council.
The various community-based interest groups and improvement organizations coalesced under the umbrella of the Fort Road Federation. Over the span of decades, it sustained dedicated community activists and paid organizers to plan, advocate and develop for neighborhood needs.
One little seed I planted was a primitive, hand done, typewritten community newsletter then called W7th News. After I left for military service in 1971, the effort was picked up by Kathy Vadnais and others and remade into the newsprint paper you hold in your hands.
Vadnais was a young mom transplanted to the neighborhood’s affordable housing. She brought with her a family of four little kids along with a background in journalism. The Community Reporter was a way for her to actively contribute to the need for community improvement while being able to stay at home with her children.
Over the years, the Community Reporter has been a main source of communications for the many conversations and actions needed to maintain community control and a sense of place and belonging. Growing with the St. Paul neighborhood press movement of the 70s and 80s, the Community Reporter is a survivor – depending on the efforts and support of local resident volunteers, a small cadre of paid professionals and a steady core of local advertisers.
Long may it live.

Neal Gosman, a granddad of many and husband of Minnesota Senator Sandy Pappas, is currently a union officer at MSP airport.