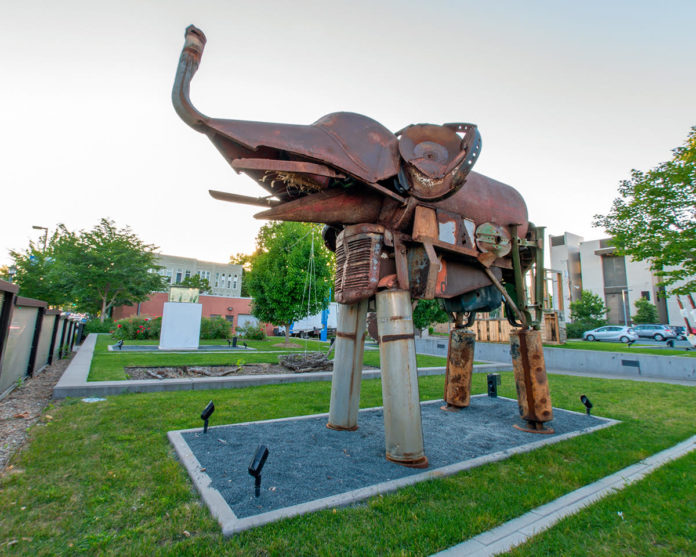 I grew up in the Midwest on a traditional farm—dairy, beef, pigs and all the crops to feed them and us—where I absorbed a great work ethic and a real sense of community. I learned how to fix just about anything on the farm, which helped create the man I am today. I also learned that my grandpa Kelly was an inventor and had US patents on farm machinery for making it easier to harvest the crops.

A summer course at the Iowa State University Journalism Department on photography had a great impact when I reached Augsburg. I applied to be a photographer for the school newspaper. I became photo editor and soon added the yearbook and other local photography jobs to my work. To focus more on photography, I transferred to MCAD (Minneapolis College of Art & Design), with its amazing facilities and access to top of the line cameras and studios. I also explored cast metals during this time and I was hooked. Seeing the liquid metal created the need to explore more deeply. When the head of the Sculpture Department, Michael Bigger, complimented me on my photography and said that I was a good photographer, but I could be a great sculptor, I agreed to study under him as my mentor. He was a large-scale monumental sculptor, and I wanted to learn all that I could from him.

He became my Father of Art. The connections he helped me make led me to cast iron art and building furnaces for casting. The first of many Iron Pours was held at MCAD.

After college I worked in the large-scale prop industry as a welder/fabricator, building larger than life objects for advertising agencies in malls, on billboards and theme parks around the world. Along the way, I also worked for blacksmiths, interior designers, furniture designers, industrial fabrication shops and finish carpentry. All of these jobs have helped create the craftsman that I am today.

I was hosting a Cast Iron pour with the White Bear Center for the Arts when Kle Thune invited her dad Dave Thune to come see what we were doing. After that event Dave approached me about collaborating on a festival at the abandoned Schmidt Brewery in St. Paul. In 2008 we had our first West 7th Schmidt Brewery Iron Pour. There was live music, food trucks and a fiery spectacle which was repeated for five years, until Dominium took over the brewery and created the Schmidt Artist Lofts.

In 2014 I was asked by my alma mater, MCAD, to build a large-scale sculpture for their new sculpture park on campus. “In the Room” was built and installed in the park in 2014 and had the honor of being placed next to a Michael Bigger sculpture. This was an amazing feeling of accomplishment.

I moved back to the Twin Cities in 2015 and found how the Schmidt Artist Lofts had been developed. I knew I needed to live here. I love what this West Seventh area has become: a vibrant home for artists to live and work together; collaborating with each other and with the community at large.

My dream of having my own studio is now coming true, with my new venture at the site of the original Orme Omaha Brass & Iron Foundry — KRL Metals Art Studio. This building from the early 1900s housed the foundry that cast parts for the booming railroad industry.

Initially, I’ll offer introductory welding classes, and am working on a collaboration with the St. Paul Public Schools and a local charter school. By early 2021 I should have the foundry completely set up for teaching a variety of different styles, techniques and metals [aluminum, bronze & iron]. Eventually I will add blacksmithing to the course schedule. I am committed to offering life-building skills (and in some cases career-building skills as welders or entrepreneurs) to those that crave it.

My art is all about recycling. Taking what is old and making it new, giving it a new life that is appreciated.

Diane, my wife of 21 years, supports the business and myself with her creative energy. Inquiries for teaching and speaking engagements, commissions or iron pour events can be sent to krlmetals@gmail.com.