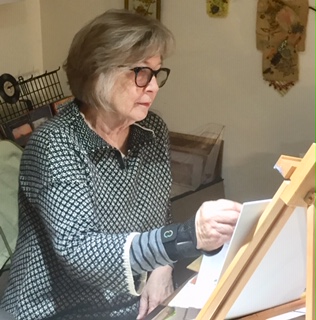 Margaret Kinney, who serves on the board of the Community Reporter, didn’t fancy herself an artist per se until she retired from her job as women’s addiction counselor 10 years ago. In that role, she had worked to draw out others’ creativity through writing exercises, but her own work would have to wait until she could find the time to free her inner creativity.
Kinney majored in fine art in college, sure, but the life of a full-time artist always seemed out of reach, so Kinney instead turned to a role as an arts administrator before turning to her counselor role. But all the while, Kinney’s artistic gears churned as they had done for as long as she could remember.
“I had been interested in art since I could pick up a crayon,” Kinney said.
When retirement finally came, Kinney underwent the identity crisis many feel upon leaving their careers behind, and for a couple years she asked the question “What else am I?” The answer for her was a landscape painter.
While Kinney considered her work as a counselor as an artform in and of itself, painting has afforded her a unique path to channel her inspiration, which she gets from nature. Nature, she says, is her spiritual home. She sticks mostly to painting in her efforts to capture the essence of nature’s beauty. It’s a process that comes naturally to her.
“Trying to recreate and express and translate and depict natural beauty didn’t seem to be a decision at all,” Kinney said. “It was just channeling.”
Now, Kinney will get a chance to continue that endeavor at her latest exhibit at Amore Coffee, located at 879 Smith Ave., West St. Paul. The exhibit will run from Jan. 15 through March with an opening ceremony slated for 4-6 p.m. on Jan. 15.
Kinney’s works depict vignettes of natural landscapes in a realistic, yet ethereal manner with just enough color to guide the eye through their compositions.
Kinney has been displaying her work around St. Paul for the last decade. Her first exhibit was at Claddagh Coffee, and since then she has taken part in countless other art-oriented events. Over that decade, Kinney has accumulated a studio-basement filled with paintings and a floor coated with watercolor, acrylic and oil paints.
While many artists struggle with a lack of inspiration from time to time, Kinney often has the opposite problem.
“Inspiration can be fleeting, but usually the problem is having so much inspiration that the list of things to paint is too long,” Kinney said. “I’ve never had a lack of inspiration.”
Kinney isn’t one to bask in the spotlight and is in regular dialogue with herself to combat her ego when she assembles an exhibition. But displaying her works does carry with it some perks.
“I’m a feeling person, so if someone feels something when looking at my art then it’s a success,” Kinney said.
As for others striving to make art, Kinney said it’s important to strike while the inspirational iron is hot and to not let the moment slip.
“You have to be inconvenienced once in a while,” she said.
Margaret Kinney is a West End visual artist and writer and a board member of the Community Reporter. She has lived in the West End since 2000.