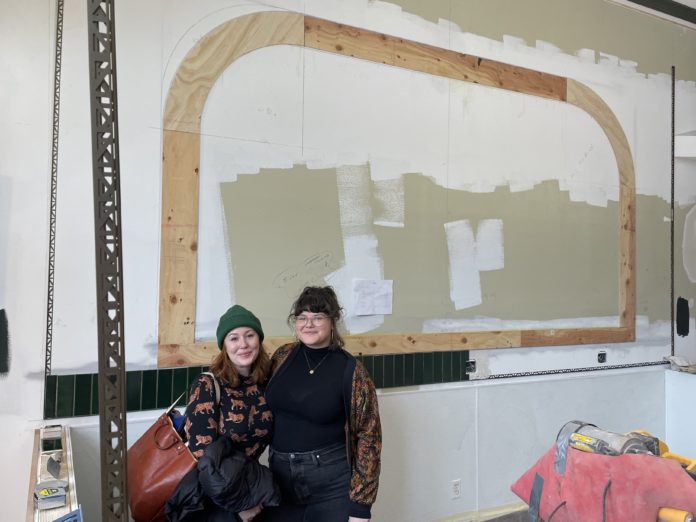 By JERRY ROTHSTEIN
Amanda Caruso and Molly Bard have known each other for a long time, worked together at Claddagh off and on during its first 10 years and are now business partners in a new enterprise that will occupy the space next door, formerly the upper studio at River Garden Yoga Center — EMERALD, a cocktail lounge, a wine bar and gathering place.
Amanda’s parents grew up in the neighborhood and went to Monroe. She now lives two houses from where her mother grew up, and her grandmother still lives there.
Molly and Amanda both went to Cretin-Derham Hall. At the University of St. Thomas, Amanda explored communication and graphic design, and Molly studied fashion design, merchandising and business management.
In 2011, when Molly’s mother Mary Hogan-Bard opened Claddagh, she was helped by Amanda’s older sister. Molly herself has worked at Claddagh at different times and took over as manager for Mary when she had to take time off after a back injury. When, more recently, Molly left another job, she decided to return to Claddagh more permanently.
“Being at Claddagh makes me happy,” Molly said.
Amanda, too, landed at Claddagh more solidly four-plus years ago, working on their social media and graphic design elements among other things.
Last winter, in the heat of the pandemic crisis and the constant scramble to adjust and literally save the business, Molly and Amanda started to envision a new enterprise. Ironically, they had the time to work on a business plan, aiming for a warm, cozy space that would respond to the character and culture of the community. They spoke with Jeffrey Austin, the building owner and head of River Garden Yoga Center, who was thinking of closing the yoga studio. He was supportive, and over the next weeks he confirmed that the space would be available. Molly and Amanda agreed on their partnership, and EMERALD was to be born.
Molly originally imagined a warm, inviting, comfortable space where people would feel free to “come as you are ” or dress up for a night out. There would be wine and cocktails, small plates, a few entrées, some special desserts — and comfortable lounge seating.
The build out has been complex. Early ideas for furnishings and layout revealed their flaws and had to be reimagined, including changing the location of the bar. Getting the necessary permits and licenses was a drawn-out affair. They were encouraged and supported by the city, while delays due to COVID slowed everything down. The liquor license alone took seven months to complete.
But these factors also gave the pair more time to think about what would work to meet their goals. They considered carefully how people would feel in the space and emphasized comfort in their furnishings and architectural elements to create an interesting milieu.
The pair are also channeling the concerns of so many West Enders and will work with and support local companies — like their wine merchants, food providers, building suppliers and, via Claddagh, their coffee roasters.
Their level of detail is based on that underlying principle of serving the community, so their space will also specialize in a variety of craft-nonalcoholic cocktails.
The essence of the Claddagh idea is friendship, loyalty and love. EMERALD is being created and offered to the community with these values in mind.
EMERALD, 455 West 7th Street, opening in January 2022. Visit emeraldstpaul.com or follow them on instagram @emerald_stpaul for further information.