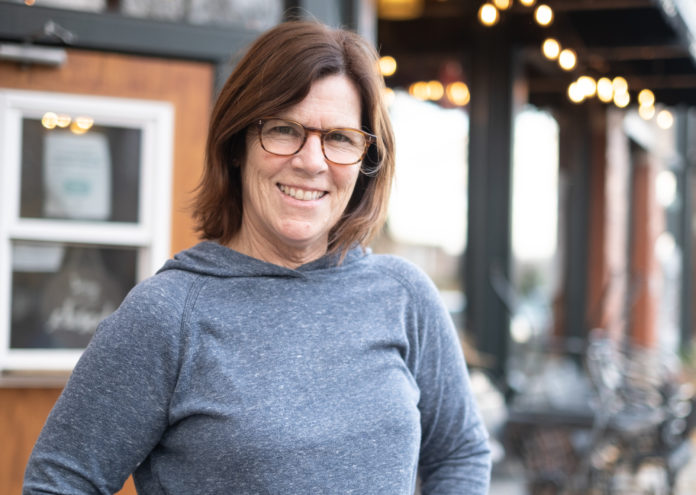 by Casey Ek
Mary Hogan-Bard was known among her friends to make a mean cup of coffee—pour overs were her specialty. They would often tease her, asking when she might open a storefront of her own. The former special education teacher, who then spent 17 years as a stay-at-home mom, wanted to try her hand at her own venture and began seeking advice from successful St. Paul coffee shop owners to see if her idea for a shop of her own might stick. The rest, as they say, is history.
On Oct. 30, Mary, who sits at the helm of neighborhood staple Claddagh Coffee, located at 459 West 7th St., celebrated the business’s 10th anniversary with a crowd of supporters, new and legacy. Among the tables set out at the celebration sat poster boards plastered with photographs throughout the years. Many photos were of former staff who have gone on to have acting and musical careers. One photo shows a pair of sisters who have tattooed the shop’s logo on the backs of their necks. Another photo depicts a quieter moment of a patron reading a newspaper.
“Who knew I would go this long,” Mary said. “For me it’s been very humbling.”
Mary likened the 10 months it took to get the establishment off the ground to carrying her fifth child. Between trying as many cups as possible of artisan coffee in St. Paul and practicing her own coffee making technique, she had her hands full.
Mary settled on an unlikely location for her store: a former adult bookstore. But the space was perfect. Leading up to opening Claddagh, Mary had visualized everything from how the space would be laid out architecturally, down to the conversations her patrons might have. All she needed was a name.
After struggling to come up with anything that captured the essence of her vision, Mary’s son Liam finally said, “Mom, how about ‘Claddagh.’” The name was so obvious that it eluded her.
The term “Claddagh”, in addition to being the name of an Irish Village, is the name of the Irish symbol of folded hands holding a crowned heart that signifies friendship, loyalty and love.
These values have been on display on countless occasions over the last 10 years. One of the primary questions Mary asks new hires is what they think customer service means. Many customers have held birthday parties at the establishment. One family even held a funeral there. Some customers trust Mary with dating advice, and the store owner has on multiple occasions sneakily given the thumbs up or down on customers’ dates reined in from dating apps.
Employees too, Mary said, have become like family to her. While she knows working at Claddagh is a steppingstone for most who aspire to life outside the coffee industry, she is inspired by the fact that she may have played some role in their future successes.
“I feel proud that I was able make a difference in the lives of actors, musicians and students of all types,” Mary said.
Now at 63, Mary isn’t sure how much longer she will keep at it. It wasn’t too long ago that a back injury took her out of work for around a month, and since then she has learned to delegate tasks, including to her daughter Molly Bard, who now managers Claddagh. Molly has her sights on opening Emerald, a wine bar next door in what was once the River Garden Yoga Studio. She is hoping to open around mid-December, Mary said.
As Mary looks back at the last 10 years at Claddagh, which has an additional satellite location at 612 Selby Ave., there isn’t much she would change.
“I thought to myself when I was opening, ‘I’m going to live without regret,’” Mary said. “I didn’t know how long the store would go on, and if it didn’t work out, I could at least say I tried.”