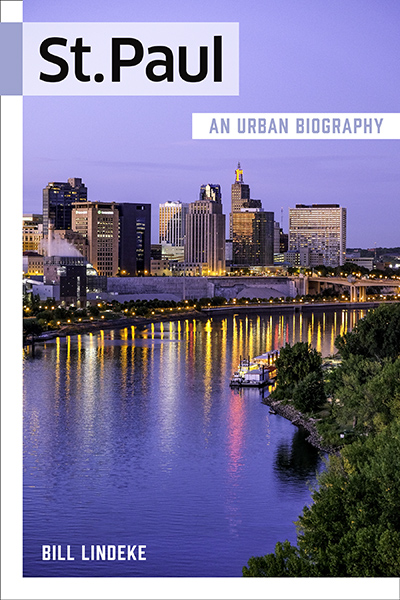 By Casey Ek
Why is Minneapolis a larger city than St. Paul despite the latter being our state’s capital? Why is Summit Avenue such a hotbed for illustrious homes? Precisely who were the movers and shakers after whom many of our streets and parks are named? Is the city’s past incongruent with modern residents’ progressive sentiments? These questions and many more are the subject of a local historian’s latest book.
Bill Lindeke’s St. Paul: An Urban History, published by Minnesota Historical Press, details the meandering and often painful history of a city many of us call home. Using his authoritative, yet casual tone, Lindeke brings readers on a ride through St. Paul’s founding on the backs of whiskey sellers, through the turmoil between settlers and Minnesota’s Indigenous peoples and through the political, military religious and industrial underpinnings of a city that has grown increasingly diverse over the decades.
Lindeke does not mince words when covering our state’s uglier histories like the mass hanging of the Dakota 38 or the displacement of the Rondo neighborhood’s Black residents, but he does not paint the city as wholly off kilter. Lindeke will bring readers to the brink before providing insight and optimism as he looks ahead to a brighter future.
Detailing lives of Minnesota’s Somali, Hmong and other populations of color, Lindeke keeps his field of view wide and makes St. Paul: An Urban History a must-read for readers of all backgrounds hoping to expand their understanding of St. Paul’s contributions to the outside world as well as its shortcomings.
Covering an era in the late 1800s when class disparities were stark and were exhibited through locations on which families were able to build their homes, Lindeke writes:
It’s easy to imagine people looking down at the Italian and Polish people living underfoot, gaping at those they viewed as inferior. On certain spring days, as the river rose, they may have seen families gathering their belongings into boats, paddling down the streets to the nearest dry land…Picture the city’s Black porters and barbers, who, like many service workers of the era, maintained an uneasy relationship with the booming middle class. The gap between rich and poor was visible nearly everywhere in old St. Paul, hard to ignore.
Through detailing the lives St. Paul’s history makers much like a novelist might, Lindeke paints the past with a colorful brush and forces readers to take a second look at their surroundings, be those public parks or other land marks, like the Peanuts statues scattered throughout the city.
At 192 pages, St. Paul: An Urban History is an approachable read for those looking to brush up on our capital’s history—like I was. But, it also provides just enough of the minutiae of key events, such as the dealings of St. Paul Police Chief John J. O’Connor, who had his heyday in the late 1800s and early 1900s, for history buffs as well.