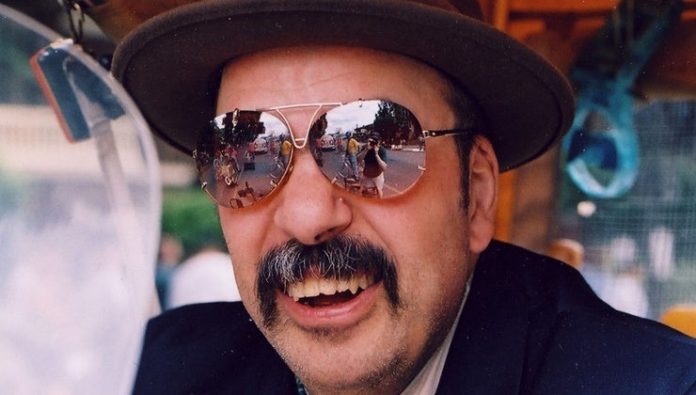 By Tim Rumsey, MD
Halloween evening 2004, Carl Bentson had 103 trick or treaters come to his lower St. Clair home. Each visitor received a can of Shasta soda pop and two candy bars, regular size until the treats ran out at about 8:30 p.m. Then, Carl opened the refrigerator to give away treats. The last kiddo of the night got a yellow, three-quarter-filled bottle of French’s mustard.
Carl, “Mr. Positive” to many, is a West 7th Angel in an orange safety vest. You have likely seen him pedaling his canopied, three wheeler all around West 7th. Every day, every season, year after year. Never does he utter a discouraging word.
What’s more, his house is decorated to the max for all holidays. Halloween and Christmas are his favorites, of course, but he doesn’t ignore Thanksgiving, the Fourth of July, but also Veterans Day, President’s Day, Flag Day and MLK Day.
Carl’s famous. He’s been on TV, radio, in print, and there’s also been a video documentary of his life.
Carl and I recently caught up during an afternoon at Shamrocks.
Carl is still working full time as a custodian for Bridgeview School where he was once a student. But at 59, Carl is not as out and about as the days when he cut the grass and snow blowed neighbor’s sidewalks, bus stops or local storefronts. Gratis. Unheralded.
Carl always snow blowed his foster grandmother’s walkways and the mile-long stretch of public sidewalk between his and her houses.
His grandma died in 2004 at 100. Carl was one of 162 foster children for whom she cared. Once, she told me, “Carl was always my favorite. He never really went away. And now he cares for me.”
Wherever Carl goes, he still pulls weeds and picks up renegade trash. The world is a cleaner place because of Mr. Positive.
I was surprised to hear he hadn’t ridden his bike for a year.
“Can’t get parts; need a new gear hub,” he told me.
So, he mostly walks, sometimes buses and often gets rides from his close friend, Karen Koeppe.
Right now, October 2021, the outside holiday decorations blend: orange lights; Christmas lights and five little American flags in window boxes; red, white and blue lights and twelve orange soccer ball sized pumpkins.
Carl reads both the St. Paul and Minneapolis papers every day. He’s up to date even if his answers are short:
George Floyd?—“Sad.”
Covid?—“Delta is bad. Get the shot. Wear a mask.”
Terrible W 7th Street shooting?—“A girl died. It was not good. They caught the guys.”
West 7th Safety?—“It’s going to be safe.”
In the world we live in today it’s great to have a Mr. Positive among us. He is goodness. He does good. “Angel Unaware,” Karen calls him, referencing a classic Dale Evans song, and he’s right here in West 7th.
Dr. Tim Rumsey is a physician emeritus at Allina United Family Physicians. He can be reached at 651-241-5200.