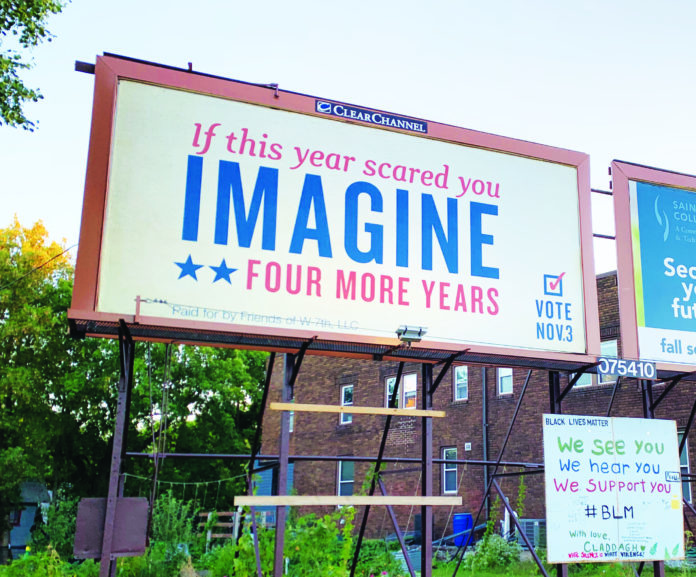 Deadline
While Minnesota state law allows absentee ballots to be requested until the day before the election, voters must register for them by October 19 to be sure they will have the opportunity to vote by mail. (In order to count, ballots must be received by or on election day, November 3, and the Postal Service warned states in July that ballots must be requested at least 15 days before an election for it to ensure they will get to voters in time.) Request your absentee ballot today on the Minnesota Secretary of State’s (SoS) website: rb.gy/awtve6.

If you plan to vote in person instead, find your polling place at pollfinder.sos.state.mn.us and pre-register (rb.gy/3fe0km) by October 14 to avoid waiting in unnecessary lines. As a U.S. citizen in Minnesota, as long as you are not currently serving a sentence for a felony conviction, you also have the right to register to vote in person on election day. To do so you will need a state or tribal ID or other means of verification (full list of accepted proof-of-residence here: https://rb.gy/awtve6).

Get Involved
Because a majority of poll workers in recent elections have been ages 61 and older, according to a Pew Research Analysis, a group at higher risk for succumbing to COVID-19, Minnesota’s SoS Steve Simon is seeking new poll workers across the state. Minnesotans as young as 16-years-old are eligible to become election judge trainees. All workers are paid temporary employees and will be provided personal protective equipment. Multilingual applicants are especially in demand. Ramsey county residents may apply here: rb.gy/wca3i8.

The Races
Decided by less than 50,000 votes in 2016, the U.S. presidential race is more hotly contested in Minnesota this year than most any state. FiveThirtyEight, the website founded by polling and statistics expert Nate Silver, recently warned Minnesotans to “be prepared for [the state] to be one of the main swing states going forward.” When this publication went to print, Silver’s model for predicting the election ranked Minnesota as the eighth likeliest state to cast the deciding electoral college vote and thereby determine the next president.

Important “down-ballot” races are also in play. (Preview your ballot on Minnesota’s SoS website: rb.gy/wwye0j.) Minnesota’s junior U.S. senator, Tina Smith (D), the former lieutenant governor elected to fill the seat Al Franken vacated in 2018, is running for reelection against Republican Jason Lewis, who previously served as U.S. Representative of Minnesota’s 2nd congressional district (2017-19) and hosted The Jason Lewis Show, a talk-radio show syndicated by the network that also broadcasts the extremist conspiracy theorist Alex Jones. (Smith is favored to win reelection.) The race to represent the state’s 4th district in the U.S. Congress pits the incumbent, Betty McCollum, a Democrat who has represented the district since 2000, against Gene Rechtzigel, a self-employed “farmer, property manager, and self-taught legal expert,” who eclipsed his previous opponent by less than 2 percent of the primary vote to emerge as the Republican nominee.

For the state capitol, West End readers can weigh in on the contests in either the 65th or 64th state senate districts, depending on where they live.

In the race for state senator in the 65th district, Paul Holmgren (R), a retail sales associate and father of three, is challenging the incumbent, Sandy Pappas (D), the former senate president (2013-17), whose campaign has advertised in the Community Reporter. Pappas may be best known for authoring 2014’s Women’s Economic Security Act, which granted women new protections in the workplace and was credited by Inside Philanthropy with helping Minnesota narrow its gender pay gap in the three years following the law’s passage more than any other state in the upper-Midwest. The race to represent the 65th district in the house sets longtime state representative Carlos Mariani (1990-), a Democrat who also serves as executive director of the nonprofit Minnesota Education Equity Partnership, against Margaret Mary Stokely (R). Stokely, a mother of three whose profile on SaintPaulRepublicans highlights her faith and the insights her disability has given her into government inefficiency, lacks a website or any social media presence beyond a mostly inactive Facebook page featuring a cryptic profile image of the Twin Towers framed by a banner that says “COVID-1984.”

The 64th state district will pick its new senator: Erin Murphy (D), a former representative in the Minnesota House (2007-19) who was majority leader (2013-14) is favored in the race against real-estate agent Sharon Anderson (R), who has mounted quixotic bids that have ended in defeat for positions as varied as Minnesota Supreme Court justice, Minnesota attorney general and U.S. president. For the 64th house district, Georgia Dietz, a Republican with no online presence or contact info that we could find, is challenging Minnesota Rep. Dave Pinto (D). Also an assistant prosecutor for Ramsey County, Pinto aims to leverage his experience in both violence prevention and as the chair of a state house committee focused on early-childhood policy to get “every Minnesota child off to a great start.”

The St. Paul Public Schools will elect a new board member-at-large to replace the late Chairwoman Marny Xiong, who passed away in June. Jim Vue, a parent and program facilitator at a digital arts nonprofit, has served on the board as an interim basis and is trying to fend off five challengers. Among them are James Farnsworth, a senior at the University of Minnesota who serves as executive director of the Highland Business Association; Keith Hardy, a former member of the school board who was ousted in 2015; and Omar Syed, a small-business owner who ran unsuccessfully for the board in 2019.

A number of judge appointments are also on the ballot. For associate justice at the Minnesota Supreme Court, voters across the state will choose between Paul Thissen, the incumbent, and attorney Michelle McDonald, who became embroiled in a controversy when she was the Republican nominee for the state’s Supreme Court for the first time in 2014 and was found guilty of obstructing the legal process after being pulled over and refusing a sobriety test. Voters in Ramsey county, the state’s second judicial district, will weigh in on another contested race: Pat Diamond, a lifelong St. Paul resident who serves as the lead judge in Ramsey County’s treatment courts, giving alternatives to incarceration, is running for reelection to the district court against Ngozi Akubuike, a Nigerian-born former Scott county prosecutor who also served as Minnesota’s ADA coordinator and legal manager.

Editor’s note: A federal appeals court ruling on October 28 overturned Minnesota’s election policy that would have allowed ballots received after election day to count so long as they were postmarked on election day. Minnesota ballots must now be received by or on or before election day, November 3, to be counted, which this article has been updated to reflect.