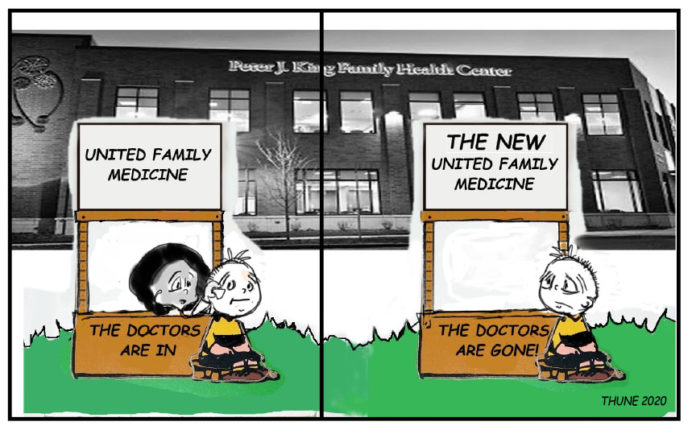 Less than a year into their roles, the CEO and board chair of the United Family Medicine (UFM) clinic have initiated action to sever the clinic’s relationship with Allina Health, eliminating the partnership that has brought comprehensive health services to our community. This action has resulted in the UFM Residency Program (an Allina Health program) planning to leave the clinic and UFM drastically reducing its physician staff—from the 13 current doctors and 21 family medicine residents (all MDs who now see UFM patients) to 3-5 staff physicians.

What is left of UFM may lack programs that have until now been at the center of its work. While the clinic will continue to provide maternity care, its physicians will no longer follow patients into the hospital to deliver babies. Though the clinic will continue to serve the geriatric population, it will do so without its two geriatric specialists, who are departing. Likewise, if UFM’s mental health and addiction programs continue, it would be without the physicians who led its innovative four-year effort to treat substance use disorders. In fact, all but one of the current physicians are leaving UFM with the residency program, fracturing continuity in patient care.

Why make such drastic changes, after 27 years of a successful partnership between UFM, United Hospital and Allina Health? UFM is financially sound, operating in the black, with net revenue over expenses of nearly $500,000 in 2019. And why make these changes under the cover of COVID-19, when all physicians were furloughed? And why are exams being limited to 20 minutes, insufficient time to deal with complex medical issues, geriatric patients and other individualized patient needs?

In 2004, it was with the support of a community-based advisory board and the blessing of Allina Health that UFM evolved from its status as a United Hospital-then-Allina Health clinic to become an independent, community-based clinic. With the leadership of then-CEO Jeannie Bailey; the support of Allina Health, the West 7th community, the City of St. Paul, and the United Hospital Foundation; generous gifts from the Peter J. King Foundation and McGough Construction; and donations from patients and community members, UFM found financial backing to build its new clinic. When it fell short of its fundraising goals, Allina Health’s contributions made up the difference. In 2009, UFM finally opened the doors of its new, $14 million location at Randolph and West 7th, where it remains today. In 2012, UFM became accredited as a Federally Qualified Heath Center, to the benefit of all area community members seeking a medical home.

Last year, changes began in earnest when two UFM patient representatives (including the board chair) were removed from the UFM board of directors, as were the three resident physicians, with UFM leaders citing a “conflict of interest” in each case. (A recent site visit from the Health Services and Resources Administration, a federal regulator, had required UFM to revise its structure so that its chief medical officer would be a UFM employee rather than one “leased” from Allina Health, as all of the clinic’s resident physicians are. UFM leadership generalized that determination to conclude it was a conflict for any Allina Health employee to be involved in the clinic’s leadership.)

Then, just weeks after UFM’s CEO, Ann Nyakundi, came on board as interim chief executive in October 2019, she described to medical staff the “need for change” and “independence,” which included rebranding and extricating the clinic from its relationship with United Hospital and Allina Health. Communications between clinic leadership and medical staff, already tense, continued to deteriorate.

Under the guise of COVID-19, all physicians were furloughed in March—barred from even telemedicine patient visits—despite that Allina Health was willing to pay physicians to maintain clinic presence during the nascent pandemic. There was no communication with patients or the community regarding changes in clinic or physician services. Many patients entered the clinic thinking that they were going to see their primary care physician, only to discover that they were seeing someone else. Physician email accounts were deactivated for several weeks, and residents who raised concerns about patient care were reprimanded and silenced.

When the physicians returned to the clinic in mid-July, they discovered that its leadership had chosen to prioritize expanding offices and dental services over providing needed workspace and resources for the resident physicians. Residents found their files and belongings, left behind in the spaces designed and built for their work, packed into boxes. One area of the clinic that is required for the education of resident physicians by the Accreditation Council for Graduate Medical Examination was taken over by the administration.

On behalf of our community, and as neighbors or patients of the clinic ourselves, we declare “no confidence” in the current leadership of the UFM clinic. We call first for explanations. Ultimately, we believe the only long-term solution for serving our community’s needs involves the removal of the CEO and board chair, and the return of our doctors and the residency program. Unfortunately, given UFM’s structure as a self-perpetuating non-profit whose board is not elected, we see no mechanism for such positive change.

We are proud of how the partnership between Allina Health’s UFM Residency Program and UFM has built a thriving, vital institution in our region, serving more than 15,000 patients in 2019, 2,100 of them in a language other than English. The partnership has provided top-notch care to patients across our community, with 43 percent of those treated last year living below the Federal Poverty Rate and 51 percent being people of color. We ask for your feedback and your ideas at the Save United Family Medicine Facebook group for how we can support a program that continues to serve St. Paul.

UFM, reached by the Community Reporter for comment, wrote, “At no time did United Family Medicine or any representative of UFM indicate a decision or a desire to extricate the clinic from its relationship with United Hospital and Allina Health.” Its representative characterized recent modifications as “changes that have occurred to the facilities to meet federal requirements” and took issue with how those developments as well as resident furloughs were framed. She declined an offer to elaborate on the organization’s perspective in a letter for publication in the newspaper.

Vaccines roll out for some — with dose of confusion