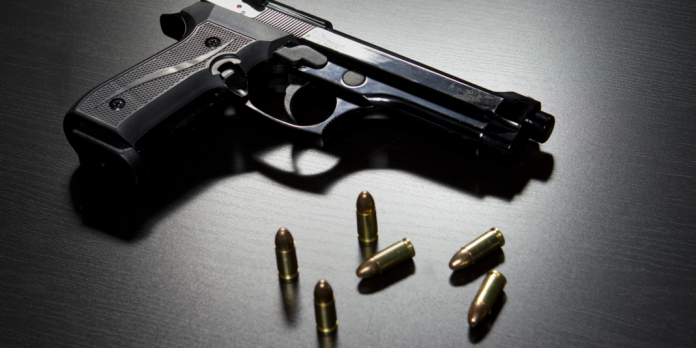 By Deb Padgett
Overheard at a local café. “He bought me a 9mm for the living room, a shotgun for the bedroom, a Glock (something or other) for the basement and a pistol for the garage.” Heads nod around their table as if this all makes sense. The talker  goes on to describe economic hardships and family troubles, and other bitter truths of their existence. I turn to my husband and say, “Are you hearing this?” He nods, a look of incredulity on his face.
“What could possibly go wrong,” we ask simultaneously. I ask him if he is staying current on the West 7th Where the Cool Kids Hang Out (Facebook) site and he says he’s out of the loop. I describe a post from yesterday in which a neighbor warns the group (us, our neighbors) to beware because someone jiggled the handle on her side door in broad daylight. The first response was “Did you call the police?” followed by post after post of people describing the arsenals they keep close at hand for just such a possible occurrence. Geez Loo-eeze! This is the same neighborhood that houses regional leadership of Mom’s Demand Gun Sense.
For more than 40 years we’ve had family in this neighborhood. We’ve seen growth, retrenchment, upheaval, gentrification, poverty, blight, homelessness, growth of healthcare, mental health providers, social service providers, faith-based outreach, community building, neighborhood associations and small business development.
I’m of the belief that guns in our homes and on our streets create the very problem people are trying to solve by owning them. They create a safety hazard. How is owning a gun or two or three or four (for cripes sake!) a reasonable and acceptable practice? I often see signs or hear the phrase, “If you see something, say something!” Well… HELL… I’m saying something now! I am shocked and appalled at the prevalence and acceptance of weapons in the hands of so many of my neighbors. You scare me and you should be scared my fear of you will lead me to arm myself because I have no business (zero, none…) owning a gun knowing what I know about the statistics on the hazard they bring to our homes, businesses and streets.
The conversation I overheard spelled a disaster waiting to happen when things get harder, pressure builds up, and the people involved lose the feeling they have any good options.
You can bet I’m not going to jiggle any more door handles in broad daylight as I try to check up on a neighbor I haven’t seen hide nor hair of since the first snow fell either.
Again, I’m seeing something! I’m saying something! Is gun ownership public data? I know I can find out if a sex offender has moved into my neighborhood. Can the Fort Road Federation conduct a survey on gun ownership and share the information? I’m, frankly, afraid to find out I’m surrounded by households owning multiple guns. I’m not only frightened by the number of guns but by the perspective that sees gun ownership as a reasonable and accepted practice. Who, I ask, will save us from ourselves? I would say more and with greater emphasis on my outrage and heavier use of expletives but, frankly, I’m afraid you’ll shoot me.
Deb Padgett is a West End artists and writer, and a regular contributor to the Community Reporter.