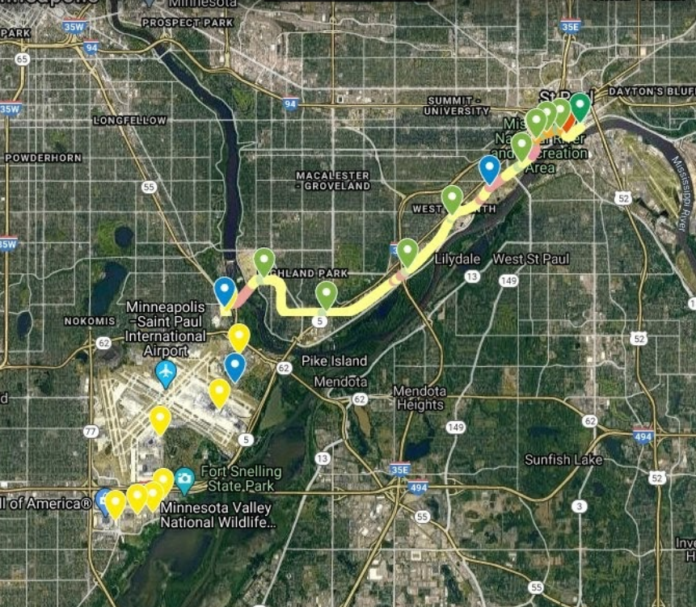 The fate of the final leg of the long-anticipated “Transit Triangle” will be decided in December. At that time, the Riverview Corridor governing board will determine project viability and changes needed.

The Blue and the Green Lines now provide two strong legs of the Triangle.

But the current Riverview Corridor Locally Preferred Alternative (LPA), with a streetcar running in traffic on West 7th, does not even come close to the capacity and reliability of the existing Blue and Green Lines.

The Riverview Corridor must also be LRT, but running in its own guideway near West 7th, with stations easily accessed by a normal West 7th bus and safely interconnecting with north/south transit routes.

The current $2+ billion LPA needs to be revised and replaced with a strong regional link. The alternative that should replace the LPA was described by James Schoettler in the June issue of the Community Reporter. The attached map shows the route; and more detail can be found on the interactive map. Here are some of the key benefits:

Especially near the X, we need wider sidewalks, not narrower; No blockage to or interference with autos and other vehicles on West 7th;  No delays from snow plows and treacherous weather (streetcars contend with slipping and sliding autos); Eliminates years of street demolition and construction;      Eliminates endless interference with normal street activity

With LRT and bus transit working together as a system, the Riverview LRT will meet both local and regional transit needs in the Corridor; Allows completion of “Transit Triangle” which is essential foundation for build-out of backbone; public rail transit network in east metro; Connects east third of the metro with the airport; Connects to existing west metro rail transit system; Increases east metro access to west metro jobs and west metro employers to east metro workers;               Can be extended east for one-seat ride to airport for major east metro businesses like 3M

No visual intrusion in historic area; No demolition of bluffs; No disruption of historic buildings and sacred sites; This new location for the river crossing at the Ford Site and the connection to the Blue Line at the Veterans Hospital can save more than $250 million compared to the streetcar through Fort Snelling!

Already confirmed by City of St Paul study;           Trail can be continued to cross Shepard Road and connect to Mississippi River trail

West 7th will have a bus that makes frequent stops along 7th and also connects with the Sibley Plaza, Montreal/35E, Randolph and Xcel stations

It is important that all interested parties, including Leaders and Citizens, provide input to the Riverview Corridor Governing Board by December to ensure that this final link to the Transit Triangle is as strong or stronger than the existing Blue and Green LRT Regional Transit Lines.

It is anticipated that more details to this Alternative Plan will become available in subsequent issues to the Community Reporter through December.