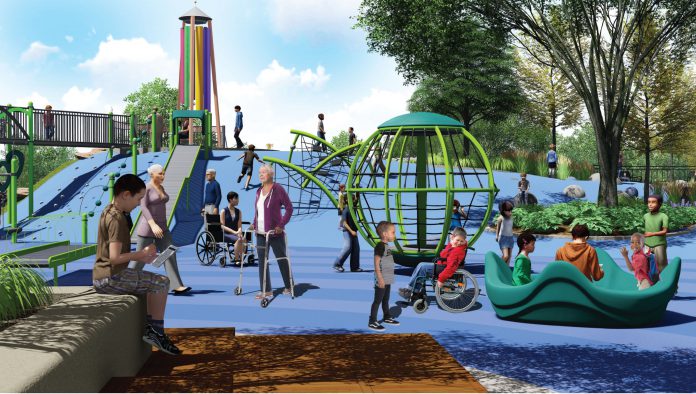 When the idea of an accessible playground for Victoria Park was included in the master plan, the City stated explicitly: “Victoria Park Playground relies on private financial contributions of all sizes, as well as advocates to share and promote the need for safe, accessible and free play space. Please join us now by making your contribution of funds, time, and talent.”
A group of fifth and (one) sixth grade students at Capitol Hill Magnet School in the LEGO League program wanted to address the issue of handicapped accessibility in parks for their project this year, and realized that there was already a full park idea formed around it. They decided to become part of the Victoria Park process, responding to that City request, and have launched a Go Fund-Me campaign with the help of their coaches.
At their website page (universalparkforsp.weebly.com), they explain the project: “Back in October we began our second season of LEGO League with a challenge to find something in our community that could use improvement and with the right solution can benefit a lot of people. Our first idea was to design a park with things like heated sidewalks and wheelchair-accessible swings so that kids of all abilities, the elderly, and everyone in between could make full use of our parks, no matter the season.
“We started talking to people at the city planning and parks departments to see what we needed to think of. We soon learned that the City of St. Paul had already given the Parks Dept. funding to plan a park, exactly like the one we were talking about, but there wasn’t money to build it just yet. This became the problem that we wanted to solve.”
The students have also developed a backup plan in case the fundraiser isn’t any more successful than the $50k they are initially aiming for. The backup plan, which they have already discussed with the city, would be to use the funds they do raise to upgrade existing parks with new, accessible features. This is only if there is no chance that there will be funding in the near future for the rest of the price tag that comes with the Victoria Universal Play Area.
They are also reaching out to city and state leaders, meeting with community groups (including Highland Friendship Club), and constantly looking for opportunities to have a bigger impact than the immediate fundraising goal.