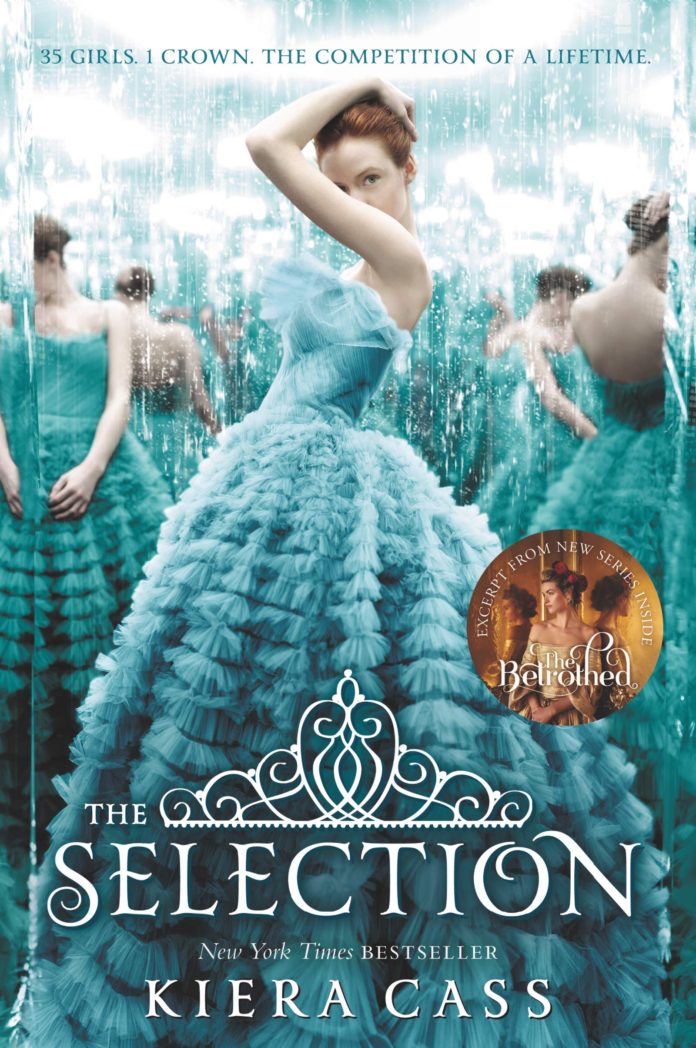 The Selection, by Kiera Cass, is a dystopian romance that is essentially a hardcore mashup of Cinderella and The Bachelor. This story starts in the country of Illea (the former United States), which is run by a monarchy, and society is organized by a caste system.
Ones are the wealthy and respected royal family. Twos and Threes are wealthy aristocrats. Fours through Sevens are various trade workers and servants while Eights are seen as the lowest of the low.  When the Prince of Illea, Maxon Schreave, comes of age, the selection process begins with girls from the ages 16 to 20 being chosen to marry him. Once chosen, the girls are brought to the palace. Despite loving another boy outside her caste, our protagonist America Singer, a 17-year-old and Five, is chosen to join the 34 other girls to become the princess of Illea. Even though she expresses unwillingness after insistence from her mother and long-time secret boyfriend, Aspen Leger, America is uprooted from her happy, mundane life and thrust into the royal spotlight.
She soon discovers that Prince Maxon isn’t unlikeable and snotty, as she assumed him to be, but rather an honorable young man with good intentions. Initially, Prince Maxon also came off as a flat love interest, especially in comparison to Aspen, but as we progress through the story, we see him gain more confidence in himself and show genuine care for his subjects and his country. His conversations with America help him become aware of his privileges and the positive impact he could leave as the future king.
However, The Selection is fairly tame as far as dystopian stories go. The romance leads to the marriage of the two, and America becomes a positive role model, a respectful daughter, and a level-headed heroine. However, before that occurs there is a second storyline as well. During the time that this book takes place, the palace falls under attack as many from the lower castes grow angry about their situation. Ultimately, these small segments of violence end up appearing in the two next books as well which may not be suitable for younger readers.
Overall, this book really isn’t the best given its lack of originality, but it is still an interesting read with the development of America becoming a leader for the country while maintaining her sassy and overwhelming character. Although this review may be perceived as harsh, the result of this was me reading this in two days. In the end, I loved all of the drama that this book had, adding the wonderful descriptions of food and the landscape as well, which allowed me to be easily thrust into the story. This book taught me that not everything in life is always so sweet and dandy, even in romance/dystopian books. In conclusion, I would definitely recommend this book to more experienced readers which is why I deem this as a 12+ book.