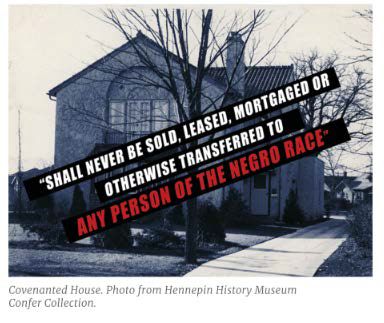 by Jerry Rothstein
Sue Nichols is a long-time West End resident and a realtor with Coldwell Banker. In her career, she has helped many people buy and sell homes, often with the excitement of the first-time buyer’s preparing to settle down and provide their families (or families-to-be) with a solid foundation.
The original Owning Up! display was created by a team for an exhibit at the Sabathani Center in Minneapolis last January. Advice was sought and received from by “Mapping Prejudice,” a team of geographers, historians, digital humanists and community activists from Augsburg University and the University of Minnesota seeking to expose structural racism in Minneapolis. Their study of property deeds in Minneapolis revealed the extent of racial prejudice built into the system.
After many St. Paul Area Association of Realtors (SPAAR) members had seen the exhibit, the SPAAR Diversity Committee commissioned a mobile version of Owning Up! to educate real estate professionals and the general public on the use and impact of racial covenants. They wanted to tell this story graphically and include original content plus additions specifically about redlining in St. Paul. “Actually seeing the deeds was an eye-opener,” Sue remembers. The display was created by Kacie Lucchini Butcher and Denise Pike, two Public Historians who recently received their Master’s degrees from the University of Minnesota.
The deeds showed a systematic, overwhelming and successful effort to prevent African Americans and other minorities from buying property in specific, well-defined areas of the city.
The first step toward this goal saw property developers placing restrictive covenants on the property, preventing its sale always to Negroes, and often, with a variety of language, to Jews, Gypsies, Middle Easterners, Hispanics or generically “non-Europeans.”
And even if an existing property owner was willing to sell to someone from these groups, the second step saw the lenders – banks, mortgage companies and even the federal government’s housing arm – refuse to lend or issue mortgages to those properties, effectively preventing most sales.
Yes, you would be correct to ask, “Weren’t there lawsuits about this?” And the development and real estate industries fought consistently and successfully to maintain the covenants.
“It was a shock to literally see the broad red lines on the old maps,” Nichols added. They are the source of the term “redlining” – long known in the Black community as the key element in preventing African Americans from owning their own homes.
The earliest use of redlining in the country was here in Minnesota, and the long-term consequences are here as well, Minnesota’s racial gap in homeownership is among the worst in the nation, according to a report by Twin Cities Habitat for Humanity, with 76% of white households owning homes compared to 22% of black households.
Owning Up! is open to the public at SPAAR Monday through Friday. Contact SPAAR at 651-776-6000 for specific hours of availability. SPAAR is located at 325 Roselawn Avenue East, Maplewood. There are plans to have the exhibit placed in different community locations, to increase its impact. Interested organizations can contact SPAAR to arrange to borrow the display.
Gov. Walz recently signed a bill to allow homeowners to disavow racist prohibitions in their deeds. Homeowners across the state who have racial covenants in their deeds may ask their county to attach a statement to the deed expressing opposition to the language. When asked why removing the covenants completely would not be better, members of Mapping Prejudice argued that exposing them is a more powerful learning tool that eliminating them altogether.
Meanwhile, many people are hoping to move the project ahead to work with St. Paul’s records, a process that has been delayed by a lack of digitized records here.
The power of research to help change people’s understanding of how we got to where we are is evident in Owning Up! SPAAR is raising funds to support further research and to make the exhibit more widely available. It is worth a trip to Roselawn Avenue to see it for yourself.