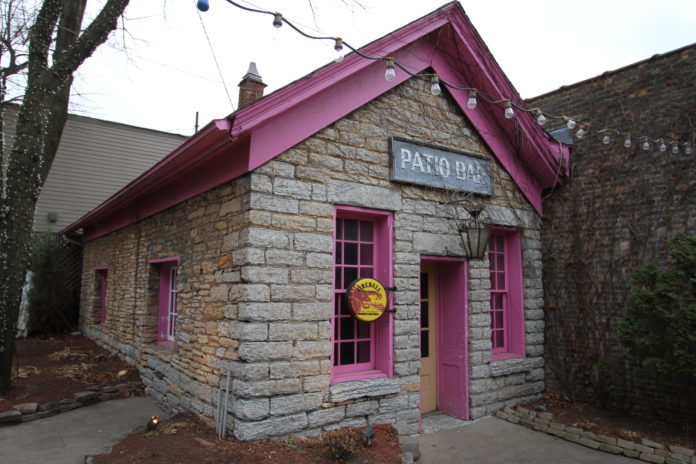 Local preservationists celebrated a cautious victory when the St. Paul Heritage Preservation Commission on Dec. 5 denied a demolition permit for the Justus Ramsey House, one of the city’s oldest stone structures.

Moe Sharif, who owns Burger Moe’s, the patio on which the building is situated, applied for the permit after the building partially collapsed earlier this year. The structure is located at 242 West 7th St.
His attorney Brian Alton argued that the building, which was condemned on Sept. 21, 2022, is structurally unsound and would be too costly and dangerous to repair or relocate to a different site.
The HPC voted 8-1 against the demolition permit, citing expert reports that the building can be restored as well as the building’s historic significance.
Community members over the last months have voiced their skepticism over the cause of the structure’s damage. A report from Macdonald and Mack Architects recommended vibration monitors be installed within the structure because the damage observed did not appear natural.
“There may be those who want to taint the owner as having done this demolition by neglect, but that’s not true,” Alton said.
Sharif, who operates Burger Moes and the Downtowner across the street in an animated address contended that the building poses an immediate risk to his customers and staff.
“I’m part of the equation here. I’m part of the community,” he said to the commission. “Please, with respect, you do the right thing (and grant the demolition permit).”
Community members, including Elyse Jensen of Historic St. Paul, voiced frustration over Sharif’s cancelling of multiple meetings with community organizations to discuss the salvation of the structure.
“Moe has made no secret that he’s wanted to develop this site for years…and I want to say that we are really excited if there is development for this site; we aren’t against that,” Jensen said. “ We think this is an excellent opportunity to work together, but I think the behavior in the last month and the amount of time and effort that our groups have put in to try to meet with Mr. Sharif and the lack of response we’ve gotten from him just highlights how little he wants to work with us.”
Jensen and other preservationists filed an emergency petition with the Minnesota Environmental Quality Board for a mandatory environmental assessment to halt the building’s demolition, the Pioneeer Press first reported.
The Justus Ramsey House is listed on the National Register of Historic Places, and the St. Paul City Council has designated the house as a protected heritage preservation site. Tom Schroeder, a neighborhood preservationist and owner of Waldmann Brewery  helped guide the most recent designation process.
He said that funding is available for the building’s restoration, but it may be a race against the clock. He said that if a restoration project is to take place now that the demolition permit has been denied, it will have to wait for winter to end. For now, it’s just about the building surviving the season.
“I mean, if I could get in the building with a 4-by-4, I’d [stabilize it]. Basically, that’s what we need to get it through the winter,” Schroeder said.
The house also represents substantial African American history. The home once housed George and Maria Perkins, former slaves from Kentucky and South Carolina respectively. The married couple lived and worked in St. Paul and represented a long succession of Black St. Paulites who resided in the house from the late 1890s to the 1930s.
The name “Justus Ramsey” comes from a mid-20th century historian’s focus on land speculator Justus Cornelius Ramsey, younger brother of Gov. Alexander Ramsey, who partially owned the area surrounding the house.
“If we make this decision to demolish it, it will really put a tarnish on our community and erase really important history that I think makes us really unique,” said Maria Sarabia of the Fort Road Federation.
Sharif, according to Alton, appealed the HPC’s decision to city council on Dec. 16. A date when the decision could be considered was not available in time for publication.