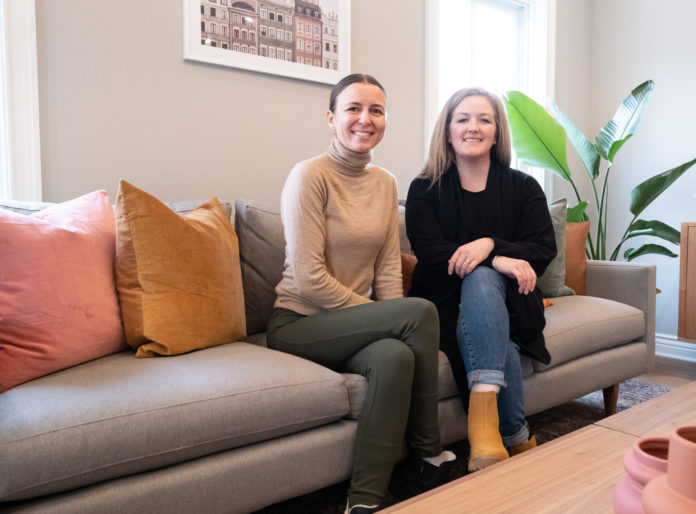 by Casey Ek
When most people think of going to the dentist, they might conjure images of sterile lighting, stiff chairs and the smell of various chemicals. But Gina Hughs and Jennifer Iburg knew they wanted something different out of their patients’ dental care, and so West 7th Dental was born.
Located at 106 Douglas St., the clinic grew out of the pair’s desire to give patients comfort while giving them quality care.
“That’s the way we’ve always practiced. We tend to have a lot of empathy for our patients,” Iburg said.
“We want patients to feel like they’re in control of their treatment,” Hughs later added.
Hughs and Iburg cut their teeth a the University of Minnesota School of Dentistry, graduating in 2011. Then for the next decade, they learned the ins and outs of the profession at chain dental clinics until in 2019 they got the idea of a homey, comfortable clinic unlike their former workplaces.
They knew that in order to pull off their vision they would need a build a space more or less from the ground up. Before opening their clinic, their portion of the building at 106 Douglas was an unkempt apartment disparately in need of a facelift. Contractors told them it would be easier to tear the building down, but that wasn’t an option.
“We really thought it was important to keep the historical aspect,” Iburg said.
After overhauling about every aspect of their space, they opened their doors October 2022. Since their opening, they have been working to cement their reputation as the coziest dental clinic around. While receiving treatment, patients can expect blankets, noise canceling headphones and ceiling-mounted televisions for entertainment. In the waiting room are comfy seats and refreshments.
The comfortability of the office, the pair says, is not just for the patients.
“We were trying to make it a very employee family friendly practice and a patient family friendly practice so that everybody who’s here is happy and satisfied,” Hughs said.
In their efforts to provide quality, affordable care, the pair offer annual plans starting at $350 for youth. Additionally, Iburg speaks Spanish and is able to facilitate care to families who don’t speak English.
Their hospitality has not gone unrewarded as they are forging relationships with the residents of the West 7th neighborhood. They estimate about 25% of their patients at one point walked in from the surrounding area.
“It’s been such a welcoming neighborhood,” Iburg said. “It’s really cool.”