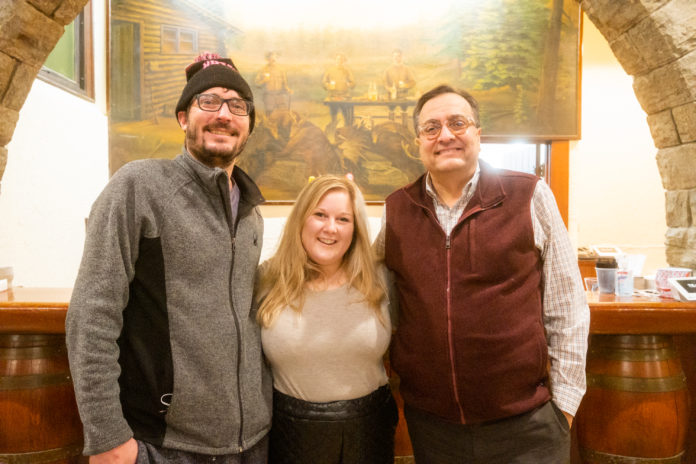 By Casey Ek
Generations in the making, the Mancinis have taken over the Schmidt’s Rathskeller.  Tucked under historic West 7th, the cellar venue has been home to countless local celebrations and is ready to do so yet again.
“I’ve got such great memories here,” Pat Mancini said from within the venue. “I just thought it was such a shame that this sits empty.”

Built in the 1930s, the Rathskeller today sports just about every facet of its original condition. Over 30 types of stone mined from the area make up the floor. The head of an artic muskox adorns the wall. One can practically hear the bustling of regalia and music echoing off the walls. Above the bar is an original painting of Otto and Adolf Bremer, who helped finance the Schmidt Brewery, drinking a beer in the woods with Jacob Schmidt. Along one wall are the remains of now collapsed (or so they say) tunnels that were used to cross under West 7th  in the days of prohibition. It is said that Ed Bremer, nephew of Otto Bremer, used one tunnel to cross over from Stahlmann/Bremer Mansion.
Crossbeams lettered with greetings in several languages embellish a red ceiling. There’s about a dozen or so greetings, written in German, Gaelic and many others. One beam original to the building is blank, and one language is missing. If Pat has his way, that will soon change, and his language of lineage will be added.
“You’ll see there’s a blank one for Italian,” Pat said. “It’s just waiting for our touch.”
After a bit of encouragement from Keg and Case Owner Craig Cohen, the Mancinis bit on the space, hoping to fill a need for an event hall in order to free up their original restaurant, Mancini’s Char House at 531 West 7th St. For now, they’re going to stick to special events, but they hope to open the Rathskeller up to the public for special occasions.
The historicity of the space is not lost on Pat, his son and chef for the family’s establishment Nick and event coordinator Molly Wilson. That’s why they plan on disturbing little if anything about the visible space in which many St. Paulites have spent time. But the space has a state-of-the-art kitchen and a brand-new tap system.
Maninci’s Char House opened in 1948 and has decades of its own legacy, so the family feels as though they were uniquely suited to carry on the history of the Rathskeller. Some might succumb to the pressure of that task, but the Mancinis feel like the space will speak for itself.
“If there’s any pressure it’s to sustain the legacy, but I feel like that’s not hard to do in a space like this,” Nick said.
“We’re going to let the space tell us what it wants to be,” Pat later added.
Wilson has been firing on all cylinders answering the phone from potential guests to the Rathskeller, but as a resident to the neighborhood herself, she feels honored to bring the community back into the Rathskeller after it sat unused for around 20 years.
“We have the beautiful building bones, and behind that we have the Mancinis’ food, so it’s a win-win for people to come down here,” she said.
Those wishing to book the Rathskeller for their events can do so by calling 651-247-5519 or emailing rathskeller.molly@gmail.com.