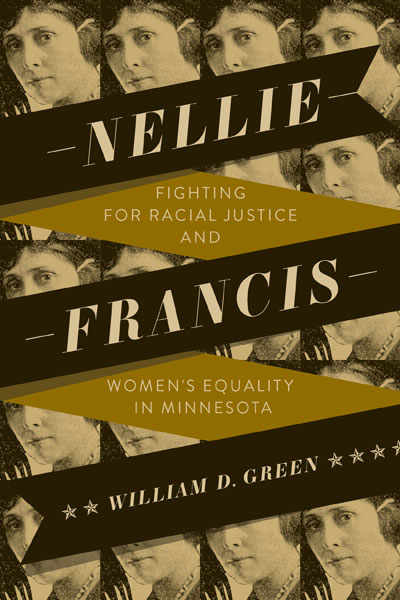 by David Lamb
In many of the histories of the period that mention her name, Nellie Francis, the subject of a new exhaustive biography by William D. Green (Degrees of Freedom, Children of Lincoln), is identified only as the wife of William “Billy” T. Francis, the U.S. minister to the Republic of Liberia and the first Black diplomat in Minnesota. But as Nellie Francis: Fighting for Racial Justice and Women’s Equality confirms, such assessments ignore the stunning contributions of a local trailblazer of civil rights, who, perhaps because she sometimes obscured her own feelings in service to the causes she pursued, has gone astonishingly overlooked.

Francis spent her early years living “just beyond the shadow of the capitol” of Tennessee, then overseen by a governor that was a KKK member, later growing up in St. Paul, where she attended Central High School from 1888-1891. In a time when, as Green notes, faculty at the school “advised Black boys and girls to drop out,” Francis instead graduated the star of the debate team, having already shown a talent for winning hearts and minds for causes of racial equality. Pioneering the legal profession as an early woman in the field, she worked beside her husband in an independent legal practice while also advocating as an active leader in political groups.

The onetime honorary president of the Minnesota Federation of Colored Women’s Clubs, Francis worked to convince nationally renowned intellectuals such as W.E.B. DuBois, Booker T. Washington, and Ida B. Wells-Barnett to campaign for the cause of women’s suffrage in Minnesota. She navigated disparate worlds with uncommon ease. A Black woman described as so “light colored” that she could pass for white, Francis brought a cross-section of perspectives to her work as a suffragist. She recognized the interconnected nature of social categorizations such as gender and race—what other feminists would begin to study 75 years later under new theories of intersectionality—starting a suffrage group for Black women in 1914.

The circumstances of the women’s suffrage movement, in which Southern Democrats pitted white and Black women against each other, dangling offers to pass the Nineteenth Amendment so long as Black women were excluded, tested Francis’ skills as a diplomat. Yet she found a way to, as Green recounts, “motivate her sisters to push beyond long memories of abandonment by white allies during race riots and unchecked terror that had erupted every decade since ratification of the last voting amendment fifty years earlier.”

The celebration of the passage of women’s suffrage would prove short for Francis. Thirteen months later, a mob lynched three Black men in Duluth, one of the deadliest such killings in U.S. history. Francis, who had already been fighting the rising tide of bigotry encapsulated by The Birth of a Nation, a racist movie that had become a popular sensation at the time, began her campaign for an antilynching bill, eventually drafting the law that the Minnesota legislature adopted.

For someone who left behind an unparalleled legacy, Francis’ personal reflections are, as a rule, scarce. There is no confessional journal to bring her preoccupations to life, no letter written to her newlywed Billy Francis gushing over their love.

Instead, one of the oddest—and ultimately most thrilling—aspects of reading this biography involves marveling at how Green reconstructs Francis’ psyche by exploring the themes and events that swirled around it. Ultimately, he reveals her to be a strategist of the highest order, who sacrificed many things—the human desire to share one’s personal world, perhaps even pursuing a more emotionally compatible marriage—in order to move social causes forward.

In showing her purposes for lingering at times in the background, Green has moved Francis back to the center of the frame where she belongs.