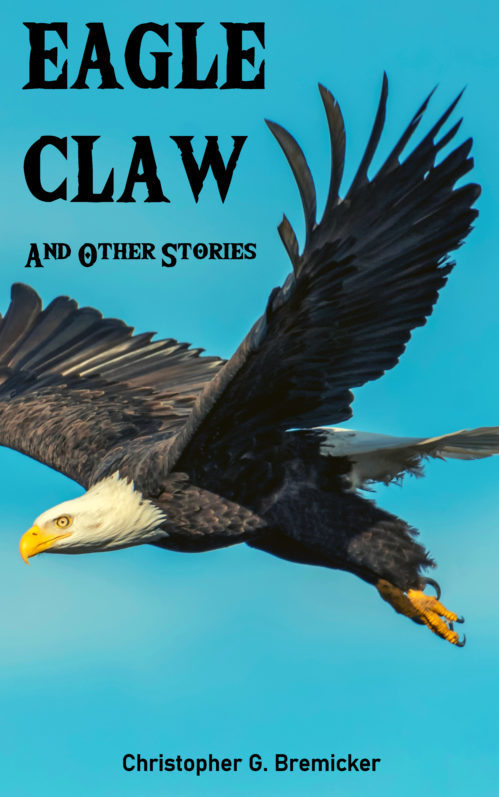 by MIMI ROTHSTEIN
Chris Bremicker is a West End writer who resides at the Montreal Hi-Rise. He has now published his third book, Eagle Claw and Other Stories, a work of true stories well told. Before the pandemic, in the days when he was writing theater reviews for the Community Reporter, you might have run into Bremicker working on his laptop at one of our many coffee houses: Fresh Grounds, Claddagh or at Fran Gray’s Mad Hatter.

Bremicker was a Special Forces medic stationed at Ft. Bragg, NC from 1968 to 1970. He has a BA in English and an MBA, both from the University of Minnesota. He is a newspaperman, downhill skier, grouse hunter, and he plays handball. He was also a sales associate at Walgreen’s in St. Paul MN, his forty-sixth job since high school. His hometown is Cable, WI, and he plays a mean game of handball.

“Eagle Claw and Other Stories is about my life after I outlasted schizophrenia,” he explains. “It is characterized by an acerbic look at life, an askance view of people, and a faith in their innate goodness. It is how the world looks to someone who walked away from an airplane crash. For the first time in my writing career, I am selling life, not a mental illness no one wanted to read about to begin with.”

“Eagle Claw and Other Stories is a work of great variety. The title story is a fictionalized account of the aborted mission of the U.S. Army’s Special Forces to free the hostages held in Tehran during the Carter administration. Stories of a rock concert that causes suicidal thoughts, a patriotic party at my hi-rise, and a dentist who ruins my teeth, express my unique voice.”

Reviewers’ Comments:
• Among other things, Bremicker is a life-long hunter and fisherman. A meticulous description of how to clean a shotgun and the proper way to operate the electric duck plucker—yes, it plucked ducks—are two of my favorites. I can now say without reservation, that I will never, ever be that close to a dead duck as long as I live. For sheer beauty and abundant detail, “Memories of Catfishing on the Mississippi River” is a treasure. Chris uses a full range of literary techniques in order to tell a truly compelling story of our stretch of the Mississippi from Downtown Saint Paul to Lock and Dam Number One.
• Bremicker possesses what he calls a photographic memory. He has formidable retention and recall. There is little that needs to be imagined or invented. Nor does his memory play tricks on him. For the most part, he simply writes down the things he has experienced in a stream of consciousness and then he backtracks with an editor’s eye and scalpel. Be sure to study his piece “On Writing” for the low down on how he does what he does. “My Books” is a short course in World Literature, also a must read.
• Bremicker is a natural story teller. His work is unashamedly personal, drawn from his own, often mundane, experiences. Whether autobiographical or fictional, true or made up, these stories are entertaining, informative, and just plain fun to read. For me Bremicker’s writing is best seen in light of Hermann Hesse’s century-old wisdom that “whoever has learned how to listen to trees no longer wants to be a tree but wants to be nothing except what he is.”

Eagle Claw and Other Stories is available April 6, 2021 and can be preordered as an eBook from Unsolicited Press (www.unsolicitedpress.com).