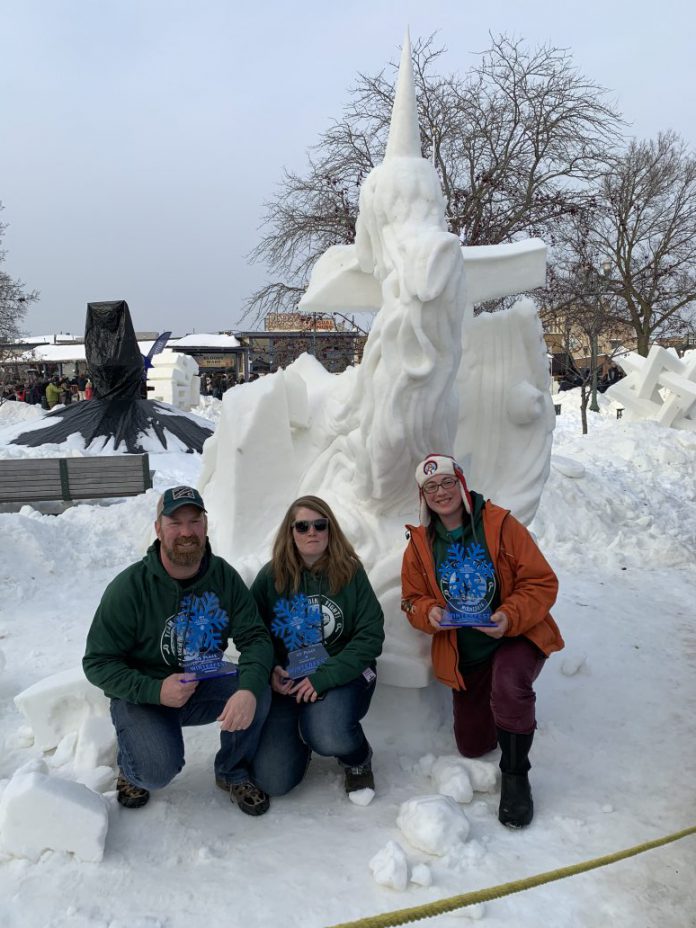 Team Dino Flight finished fourth in the Minnesota snow-sculpting competition behind number one House of Thune and two others. Yet Team Dino Flight went on to the National Competition in Lake Geneva, Wisconsin and took first prize.

Artists Heather Friedli, Jaymie Stocks, and Adam Turner battled not only the frigid temperatures, with wind chills as low as 55 below, but losing one day of sculpting to the arctic blast, a burst water main in their hotel room, a flat tire, and multiple injuries and sicknesses.

In a contest that was embroiled in controversy for the number one Minnesota team “House of Thune,” “Team Dino Fight” was pulled from a lineup of talented Minnesota snow sculpting teams to take Thune’s place after the second and third place state teams could not go. Their fourth pick status did not deter them, speaking to the talent of this unique team of artists.

Overall, their creation took 150 person-hours of work, including one 32 hour nonstop stretch of sculpting.
“We gave it our all. From frozen eye lashes to the 32 hour stretch. It was all worth it in the end. I am so honored to be able to compete with such a fine group of people at the National Competition, and delighted to have the chance to represent our state of Minnesota, showing our talent to the nation,” said team leader Heather Friedli (a neighbor who lives at the Schmidt Artist Lofts).

House of Thune won the state competition at the Vulcan Snow Park at the State Fairgrounds as part of the St. Paul Winter Carnival, and would normally have represented Minnesota at the nationals. But the themes they proposed were deemed controversial and political by national; organizers, and not “family friendly.”

Their state winner, “Turtle Island,” was conceived by Dusty Thune “to make a statement about clean water and honor water protectors and the indigenous peoples that know Bdote as sacred.” “Turtle Island” is a blend of indigenous creation stories showing our grandmother earth screaming at the stars as her body is bled of oil. The turtle shell she is emerging from is hollowed into a cave to represent Wakan Tipi with a central circle bearing the seven sister tribal fires represented by seated robed elders. When the sun is at its meridian, the sculpture is situated so that it shines down through the open mouth to illuminate the fires and make the entire interior glow. Star charts were also utilized to position the sculpture so that the Orion constellation is visible at midnight through Grandmother’s eyes from inside the cave to connect our earth with the heavens and stars above — thereby completing the circle.

“Turtle Island” marked the fifth state title for the House of Thune, making them eligible to compete at the US Nationals again in 2020. “That is, if they ever accept our proposed sculptures again,” Thune concluded. But more recently, House of Thune just competed in Canada and won the grand prize as well as people’s choice for their work “Taming the Inland Sea!”