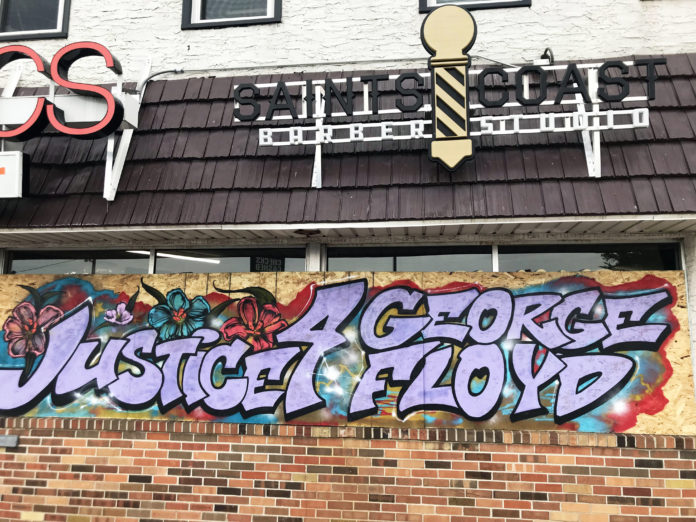 Building a Non-racist Community
by Tim Johnson
Retired pastor of Cherokee Park United Church
Editor’s note: This is the sixth article in Johnson’s series on racism. Comments and insights are welcome: send to editor@communityreporter.org.
The two white journalists being confronted by the angry white man were clearly startled They had arrived at the state capitol with the intention of covering the protest organized by Black Lives Matter in response to the killing of George Floyd Now they were face to face with this white man loudly telling them they were part of the problem. Well beyond the Covid-19, six-foot guidance, and with no face mask in site, the white man pressed in upon the journalists who slowly backed away, refusing to engage.
Without question, there is plenty of reason for white people to be angry. Watching a black man have his life slowly taken away, 8 minutes and 46 seconds to be precise, ought to make one angry. Listening to a black man pinned down with an officer’s knee on his neck, as he pleads “I can’t breathe” ought to be enough to make one angry. Being reminded of all the other black men and women who have had the knee of police brutality placed on their necks ought to be enough to make one angry. Anger is the awakening voice that says enough is enough. No more. Time’s up. Time to stop the brutality and begin repairing the damage it has wrought. It is past time for white people to share in the anger that black people and all people of color have known for too long.
As white people, we can often turn away from white supremacy, this infectious ideology of superiority, that has long afflicted our nation and our community. But, if you are a person of color or a native person there is no turning away. George Floyd could be anyone who is non-white, a bird watcher in Central Park, New York or a jogger stopping briefly to check out a construction site. If you are a person of color or native person, you know this could be you or your children, grandchildren, someone you love. With the exception of those rare days when rage boils over, people of color and native people are expected to keep that anger in check. They are denied the privilege of unloading their fury on unsuspecting white journalists. Instead, as buried emotions often do, they are manifest in higher levels of stress with not-surprising adverse results for overall health.
It is time for white people to be angry with the ways the affliction of a white supremist ideology manifests itself in policing and criminal justice systems, educational systems, health care, housing and jobs. The affliction, made so heartbreakingly apparent with a police officer’s knee on the neck of George Floyd, infects every aspect of our common life and if we are white we ought to be angry. We ought to be angry that this viral ideology of supremacy keeps us from living proudly into the ideals we cherish of being a community, a state, a nation of justice and opportunity for all.
The question for the white man at the capitol angrily confronting the two unsuspecting journalists is not “Should you be angry?” The answer to that question is “Yes.” The question he needed to ask and all white people need to ask is what do you do with that anger? Is it helpful to unleash the fury of your anger on a couple of journalists who you do not know? Is it helpful to unleash your anger and rage on those who you believe have not yet awoken to racism and injustice; your neighbor, your uncle, a co-worker?
I for one have seldom had my mind or heart opened by someone yelling at me, shaming me, and telling me what an evil person I am. It may be healthy for people of color and native people to release the valve and let some of that anger out as needed. But, for white people, venting anger at other white people can be an easy way of distancing ourselves from our complicity in white supremacy while avoiding the hard work needed to bring about change. What can we do with the energy of our anger? Educate ourselves about racism so we can help educate others. Work and vote for change, especially change led by people of color. We have every reason to be angry. Let’s put it to good use.