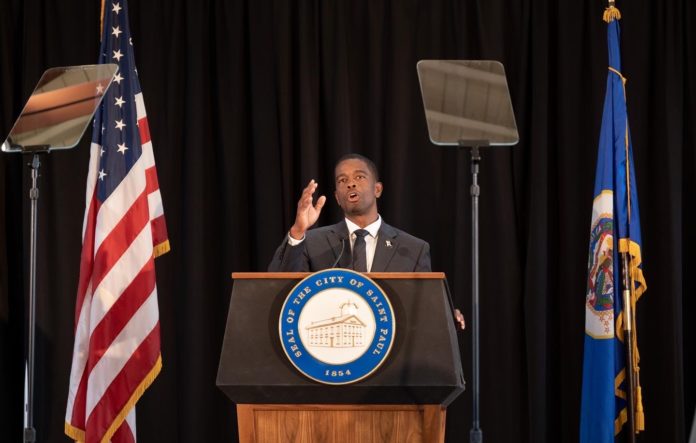 This increase would amount to roughly $19.25 per month, or $231 per year, increase for a median value home in St. Paul.
On Aug. 18, Carter outlined his budget to a crowd of St. Paul city leaders and the general public at the Harriet Island Wigington Pavilion. Overall, the budget is a $41 million increase from the $741 million 2022 adopted budget. Carter offered that the majority of the property tax levy increase (about 7.74%) is due to the transfer of the street maintenance program to the general fund.
Carter’s budget calls for adding 53 full-time city department employees. This includes 19 new employees for the police department—which constitutes 30.2% of Carter’s overall budget—and eight for the fire department—21.1% of the overall budget—to meet increased public safety needs in the wake of the pandemic.
“The nationwide surge in violent crime we saw after the onset of the pandemic has brought some of the most traumatic experiences our city has ever endured, including a record number of homicides in 2021,” Carter said. “We have invested heavily in our police department to address these challenges.”
The climax of Carter’s address came as he announced a proposal for a new “Inheritance Fund,” a program backed by the city’s existing affordable housing trust fund that would allow for up to $100,000 in forgivable loans for income-qualified descendants of those displaced by the construction of Interstate 94 through the Old Rondo neighborhood to use for home buying and remodeling.
Visit bit.ly/3QRpjCR for a full breakdown of the budget.
Share your thoughts on the budget: editor@communityreporter.org.