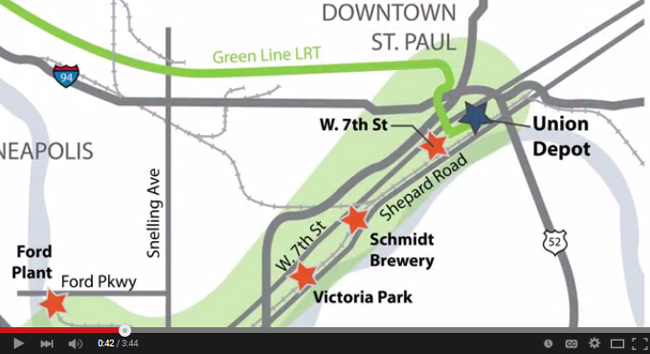 by Kent Petterson
The long awaited meeting with Commissioner Raphael Ortega as requested by the Task Force occurred on May 2 at the new offices of the Fort Road Federation. Attending were five of the six task force members as well as Commissioner Rafael Ortega, his Aide Ken Iosso and Mike Rogers representing Ramsey County transit staff.
It was a get-acquainted meeting to emphasize for Ramsey County the role of the Joint Task Force in the neighborhood during the ongoing study of transit improvements in the Riverview Corridor. The Joint Task Force is comprised of three members each from the Fort Road Federation and the West 7th Business Association.
Ramsey County, the City of St. Paul, and the Metropolitan Council have all approved further study into the Environmental Impact Statement (EIS) phase of a new “modern streetcar” line from the Union Depot downtown St. Paul to MOA via West 7th Street, estimated to cost around $2 billion. Locally, the Fort Road Federation has favored Arterial Bus Rapid Transit (BRT) and the West 7th Business Association has favored bus improvements pending more study.
The Joint Task Force began meeting in June 2018 with the goal of helping both the Federation and the Business Association stay on top of ongoing transit information for the neighborhood through what is anticipated to be a long process. We found out last year through an announcement in the Star Tribune that we would not be seeing the proposed project operating in our neighborhood until 2031/32.
Mike Rogers confirmed that this timetable is correct. Early on in the Task Force meetings it was decided to talk as a group of what our vision was for the neighborhood in the context of transit. Those preliminary discussions were then taken to the neighborhood for a public meeting in February sponsored by Task Force. Out of those discussions came a set of “Guiding Principles to Improve the Riverview Corridor.” The Principles came too late for the Business Association Annual Meeting to consider, but the Fort Road Federation approved them in April at its Annual Meeting.
The Principles are both aspirational and real in terms of what the neighborhood wants and could realistically push for in the near future. Thanks to the weather delays of our meeting with Commissioner Ortega, the Principles were ready and he received them prior to the meeting. On first reading, Commissioner Ortega did not see anything he disagreed with, but indicated there was probably nothing in them that would be funded by the Streetcar Transit project.
Frustration was expressed on both sides. At the Task Force, we are disappointed that we may not be seeing transit improvements for many years, and the County has difficulty with the current Federal Administration’s new rule-making. Due to a federally imposed time line for completion of the EIS, Ramsey County has decided to delay the start of the EIS Study and break up the process study work into pre-study pieces that can be completed prior to the official start of the EIS. This could be a study of attrition as we are denied improvements in favor of regional preferences.
Agreement was reached to recognize that an informed Ramsey County staff person would be designated to provide information in a timely manner directly to the Task Force. Better to find out the facts from Ramsey County than from a newspaper in Minneapolis.
It is still early, and a 10-year process, as Mike Rogers said at the beginning of the Riverview Corridor study in 2014, is looking more like 20 years. Some of us are beginning to think that real improvements for transit dependent riders should not have to take this long. A reality check may be overdue.
Several on the Task Force are not willing to wait for elements of our vision to move forward. Improved pedestrian and bicycle experiences, better connections to the river and better transit and other ideas need to be addressed. Task Force Member Mark Fangmeier suggested there are “low hanging fruit” of improvements we can pursue as we move forward. We can do this with or without Ramsey County. Join Us!
Send your comments and ideas to editor@comm.stpaulmedia.com or call 651-587-8859.