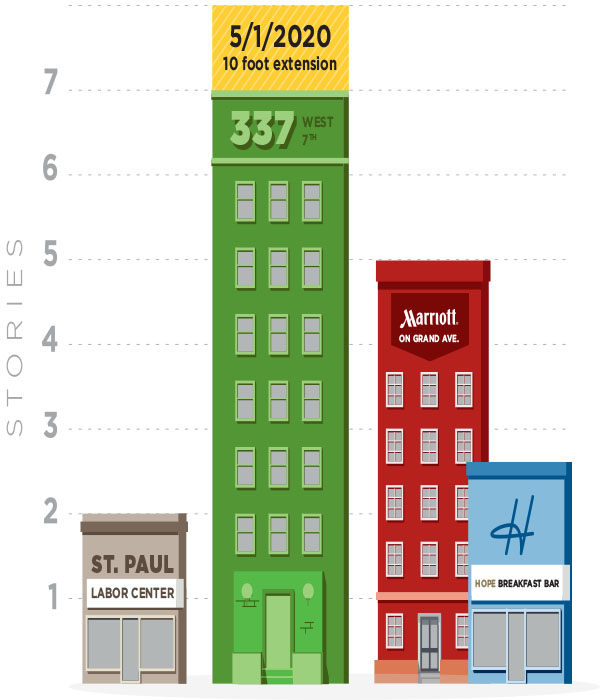 Along with more than 70 other West Seventh residents, we’ve appealed the City’s approval of a proposed seven-story apartment building to be constructed on the present site of Bonfe’s Mechanical, 337 West 7th.

The proposed structure will tower over adjacent buildings and be built right up to the sidewalks, with no set-backs, on a narrow parcel stretching between West 7thand Smith Avenue. It will be a sort of wall separating the street and neighborhood from Ramsey Hill, the Cathedral and the Capitol. A building that high belongs downtown, not on West 7th.

However, the building’s awkward aesthetics rank second to the traffic and parking problems it will create. Instead of normal drive-in parking, it will have an automated elevator bringing in and putting out residents’ vehicles. Inevitably, rush-hour lines along Smith Ave will result. As worrisome, the building’s 192 units will have only 111 parking spaces. Building residents without spaces will seek parking in adjacent neighborhoods. Area residents already lack enough space for parking on the streets in our own neighborhoods. This area already deals with a high volume of vehicles seeking street parking — patrons of nearby bars, breweries and restaurants and Xcel Center events.

Rents will likely be comparatively high. Though no prices are firmly set, from the developer’s comments it appears that the most common units — micro-studio apartments from 300 to 500 sq. ft. — will go for around $1100 monthly, about 20% higher than the median rent ($888) for studios in St. Paul, which typically have considerably more space.

If the City Council agrees with our appeal, under present zoning the building will be ten feet lower (75 feet) and have to provide 25 more parking spaces (136). We are not against a building on this site, but believe the City should require it be built under the conditions approved on 12/20/19. That’s not perfect — but it will be a big improvement.

If you agree with our appeal, please contact Ward Two Council Member Rebecca Noecker at ward2@ci.stpaul.mn.us and Mayor Melvin Carter’s office at 651-266-8510.