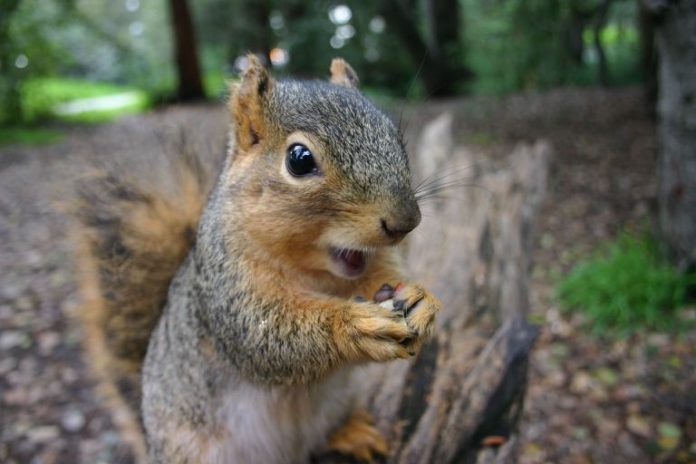 The other morning, just after sunrise, I walked down the stairs to my urban country kitchen. I pulled back the Irish lace curtains I’d stitched up many years ago. The sky was a pure robin’s egg blue. And then I saw it. Smoke. I swear, my first glance out into the garden; soaring up on the railroad tie post that guards the vegetables. It wasn’t smoke but gas that would exude out of the resident squirrel’s butt. Its tail was up!!!! The air was still and clear, the smoke cloud hung barely a moment despite its ‘long goodbye’ fart roar. It got me thinking about humans, animals, digestion and farting, remembering the Minnesota Science Museum 2012 Exhibit ‘Grossology’ and ‘Oh Yeah!’ the Renaissance Festival’s comedy team of Puck and Snot.

Of all the mammals in the world, the bobcats have the stinkiest farts and they eat squirrels. That is beyond the pale of a skunk whose nickname is ‘fart squirrel’. There is one mammal that does not fart at all: the sloth. As the slowest moving mammal in the world, its digestive track moves just as slow. Humanoids poop, respectively, once a day, whereas, the sloth poops once every 21 days. The most prolific farters are termites. Yes, they fart more than humans. Plus, they emit more methane, a greenhouse gas, than cars and cows. YIKES!!!

In my research, I found out farts can be sending out messages to us humans. Listen and Learn, it’s a British commercial for Colon Cancer: https://rb.gy/dt0lgv

Here are my October jokes! What did the squirrel say when she had to decide whether to stay or jump? I’m really on the fence about this one. Because her daughter recently took over the homestead, and momma didn’t know where she was going to nest, it was near autumn and most of the real estate was inhabited. Where did the squirrel family spend their 2020 summer vacation? Up North in Beech Tree.

Here is a fun project to do outside in your yard, on a walk in your neighborhood, in a park, or on a nature hike. It is called a Sound Scape. You can start a nature journal to record what you see and hear. You will need writing paper, colored construction paper or a thicker colorful paper, a stapler, and writing tools. Fold the colored paper in half, insert folded writing paper and staple the folded edges secure. Decorate the cover of the journal and put your name on it.

Find a spot to stand or sit still outside. Open your journal and get ready to draw what you hear and see. Spend at least five minutes listening and watching; no talking. Mark the spot where you are standing or sitting. Then draw the sounds you see and hear. I want you to think about where those sounds are coming from. Are they above you, beside you, or in front of you or behind you? Try really, really hard not to talk for five minutes. Do this three times on three different days. Then notice what you see and hear. Have fun with this project. You can repeat it until you fill the journal up with images.

Best to you this day.