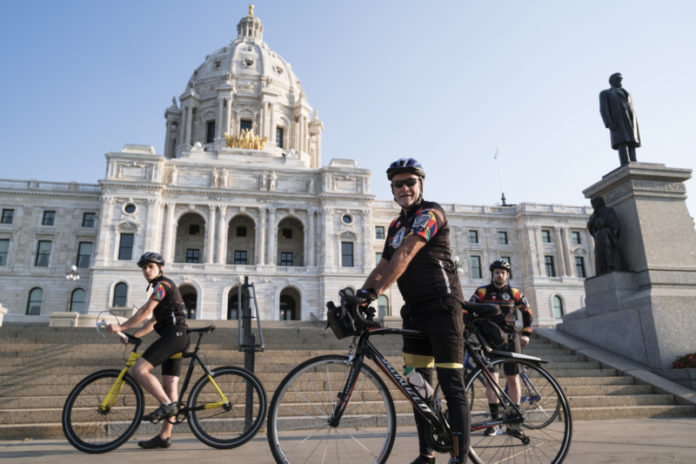 New Ulm, Minnesota, native Dan Herbeck has set off on a bicycle journey of a lifetime in honor of one of Minnesota’s most beloved priests, Fr. Greg Schaffer. Herbeck’s ride, which kicked off Sept. 8 from the steps of the Minnesota State Capitol, traces the U.S. portion of a 3,087-mile walk Schaffer took 50 years ago, from St. Paul, Minnesota, to San Lucas Tolimán, Guatemala, where the priest dedicated his life to service. Herbeck is expected to make his way through the country en route to the U.S.-Mexico border. He tentatively plans to arrive by mid-October.
Schaffer was a New Ulm priest reassigned to serve a parish in San Lucas Tolimán, Guatemala. He had a memorable impact on the people of both Minnesota and Guatemala. Together with community members in San Lucas Tolimán, Guatemala, Schaffer and the School Sisters of Notre Dame founded programs to increase access to education, housing, and healthcare in Guatemala. In 1972, Schaffer and two Guatemalan men–Elias Jacinto and Ronal Motta– walked from Minnesota to Guatemala to raise money for these programs, known collectively as the San Lucas Mission in an effort to demonstrate that Guatemala’s poverty was within a walking distance away from Minnesotans. Schaffer passed away in 2012, and today, the Mission’s work is run by Guatemalans and funded by Friends of San Lucas.
Herbeck remembers Schaffer visiting Holy Trinity, his childhood parish in New Ulm, to solicit funds for the Mission.
“Fr. Greg was an inspiring leader, passionate about his work and the people of Guatemala. He invited us to learn more about systemic poverty, and he presented the opportunity to support solutions,” Herbeck said.
Dan is motivated by a sense of responsibility, not only to his immediate neighbors, but also to those beyond our borders. Herbeck’s example is already inspiring others. Jim Seifert, president of Friends of San Lucas, for one, lauded Herbeck’s efforts.
“Dan’s goal is to raise awareness of economic disparities in Guatemala through this ride. The funds he raises will change lives for people experiencing poverty in Guatemala,” Seifert said.
To support Dan’s work and learn more, visit sanlucasmission.org/bike.