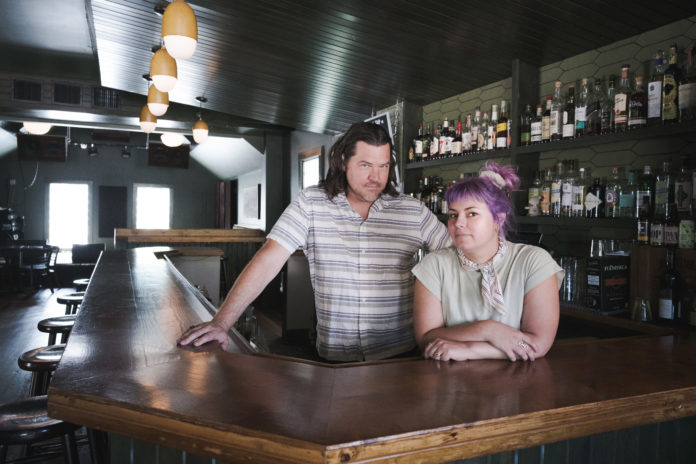 by Casey Ek
Those who know Kevin may have seen him in their backyards in the West 7th Neighborhood. Sometimes he’s alone; other times he will be accompanied by others just like him—perhaps they are also named Kevin.
For many in the West 7th area, Kevin is a symbol of belonging, and spotting him and subsequently sharing the photo evidence is the official-unofficial sign that you are in on the neighborhood joke. It’s a joke because there is not necessarily just one Kevin, there indeed may be many. It’s also a joke because Kevin is the name given to all the white squirrels who famously roam the West 7th neighborhood.
Wife and husband, Dani and Jarret Oulman, were channeling this inside joke while naming White Squirrel Bar, 974 West 7th St. In case you get lost while searching for the establishment there is a Forest Wozniak mural of Kevin that covers the establishment’s eastern side.
The mural, Jarret said, is an unambiguous showing of West 7th solidarity. But it also taps into something a bit deeper.
“Squirrels are survivors,” Jarret said. “They are resourceful.”
Since their opening last summer and well before, Dani and Jarret have had to channel their inner squirrels. After obtaining the space, which once housed the Fort Road Federation, in March 2020, the couple would need to wait over a year to actualize their vision for the building because of COVID lockdowns. Then, on June 1st, 2021, the day the indoor mask mandates lifted in St. Paul, White Squirrel opened its doors, and since then it has been a nonstop celebration of the West 7th community.
Custom cocktails carry names like Little Bohemia Rhapsody, West End Girls, and Kevin’s Raspberry Beret. If you stop into the intimate, unpretentious bar on Tuesdays, you are likely to catch Fort Road Federation Executive Director, Mary Cutrufello, alongside Trevor McSpadden rocking the White Squirrel stage, which is constantly filled with the sounds of local flavor. Also be sure to say hi to the portrait of Kevin, which will be at your right if you come in through the main door.
The owner of two other establishments—Amsterdam Bar in downtown St. Paul, which is co-owned by his father John and business partner Josh Mandelman, and the 331 Club in Minneapolis, which he owns alongside his father— Jarret holds a special place in his heart for White Squirrel. That’s because for the last 10 years the Oulmans have lived six blocks from the establishment and call the neighborhood it inhabits home.
A year after opening the small venue, Jarret often finds himself personally maintaining White Squirrel in ways he is not able to at his other establishments. He might be spotted touching up paint and working out scuffs on the wooden bar-top. Moments before his conversation with Community Reporter, he watered White Squirrels plants, he pointed out.
“That’s one thing I like about it being small, is that I can feel when we change or when we improve something,” Jarret said. “You feel like your contribution is impactful.”
Leading into the future, Jarret hopes that attention to detail will come through in the atmosphere guests feel at White Squirrel for years to come. In doing so, Jarret aims to continue harboring what he describes as a local community hub.
“I feel like we are doing what we set out to do,” Jarret said. “And the place is doing what we were hoping it would do.”