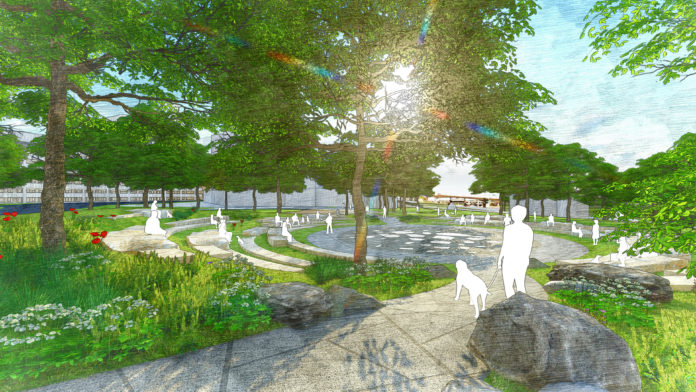 St. Paul may soon have a smattering of new river-oriented  projects that span the city’s 17 miles of the Mississippi River thanks to the efforts of the Great River Passage Conservancy and its many partners, including the City of St. Paul.

Great River Passage Conservancy Founding Executive Director Mary deLaittre spoke with the Community Reporter about the three projects the organization is spearheading. They include the Mississippi River Learning Center, targeted for Crosby Farm Regional Park, A 1.5-mile river promenade spanning downtown St. Paul’s river bluff, and the East Side River District, a restoration and optimization effort that seeks to foster the cohesion of Dakota sacred sites, industrial and civic uses for the 1000-acre area of the Mississippi River east of downtown.
Of all the projects, deLaittre said the Conservancy is tapping into the knowledge of the public at large, business leaders and numerous Dakota organizations, among many others, to help guide design and collaboration efforts. The projects will be publicly and privately funded, each with its own funding formula.
“Now the question is how do we make these projects happen,” deLaittre said. “We don’t want to squander public goodwill.”
Mississippi Learning Center
The guiding principal behind design work of the Mississippi River Learning Center is creating year-round access to the Mississippi River’s land areas, water and culture, deLaittre said. The learning center will be a headquarters for The National Parks Service, who are expected to lease the property from the City of St. Paul, and will function as a public gateway to the Mississsippi River.
The project is now in the design process, and a final design is expected in the fall. Fundraising will span through 2023, and construction is tentatively targeted for two years starting in 2024. The site could be operational by 2026.
The Highland District Council leadership, who recently sent a proposal for a safe pedestrian crossing of Shepard Road at Alton Street to city planners, hopes to be an active collaborator with the Conservancy as plans materialize, according to HDC Executive Director Kathy Carruth.
“If we can all work together it would make sense and hopefully help make the vision of a safe crossing for the residents on Shepard Road to access not only Crosby Park, but the Sam Morgan Trail and the river,” Carruth said.
The public can join an engagement meeting Aug. 11. from 6:30-8:30 p.m. Register online at bit.ly/3vcLjzb. The Conservancy is expected to reveal a 75% schematic design at the meeting.

River Balcony (Promenade)
At present those walking in downtown St. Paul lack easy access to the river. The Conservancy wants to change that. What they are proposing is a series of access points and landmarks spanning 1.5 miles that orient locals and visitors to the waterway. These eight main touch points would compliment and elevate already existing and future projects like Ramsey County’s River’s Edge project, deLaittre believes. Landmarks being proposed include a bluff walk and garden at Lambert’s landing and an elevation cutaway that connects Kellogg Park with Second Street and a reimagining of the nearby county parking lot to include recreational spaces.
DeLaittre said public input has been overwhelmingly positive for the balcony project. To that effect, the conservancy was able to raise $600,000 of public and private funds for the design process, but deLaittre believes that the river balcony project, the overall cost of which has not been estimated at the time of this article’s publishing, will pay for itself not only in the form of beautifying the city, but also in actual dollars coming from visitors from around the world. To ensure the project is completed with the considerations of business owners in mind, the Conservancy is partnering with Visit St. Paul, the St. Paul Downtown Alliance and others.
Viking River Cruises, which will host world-class tours on the Mississippi launching from St. Paul could serve as a boon for downtown. A welcoming riverfront, deLaittre said, could make St. Paul a world destination as more new faces begin experiencing the city.
“The Mississippi River is very high on the bucket list [of international travelers],” deLaittre said. “This [the river balcony] puts St. Paul up there with Nashville and all of the other great river cities.”
The Conservancy is expected to release the completed schematic design for the river balcony project in September or October.

East River District
Hoping to “reveal, heal, connect and protect,” the Conservancy is hoping to help bring together the varied interests present in the East River District, a 1,000-acre area that includes the area bound by the Mississippi River on the south and west and the bluffs to the east and north east of downtown. This area is on the Mississippi flyway bird migration route, and includes the Pig’s Eye Island Heron Rookery Scientific and Natural Area. The area has two barge facilities and plays host to dozens of species of migratory birds. Additionally, it is home to multiple sacred Dakota sites, so the conservancy is aiming to marry those uses in a way that is publicly accessible.
The East River District is still in the fundraising phase for the design process. So far, the Conservancy has raised about $200,000 of the $600,000 needed for the schematic design. Half of the raised funds came from a $100,000 donation from REI.
For more information about about the projects, visit greatriverpassage.org.