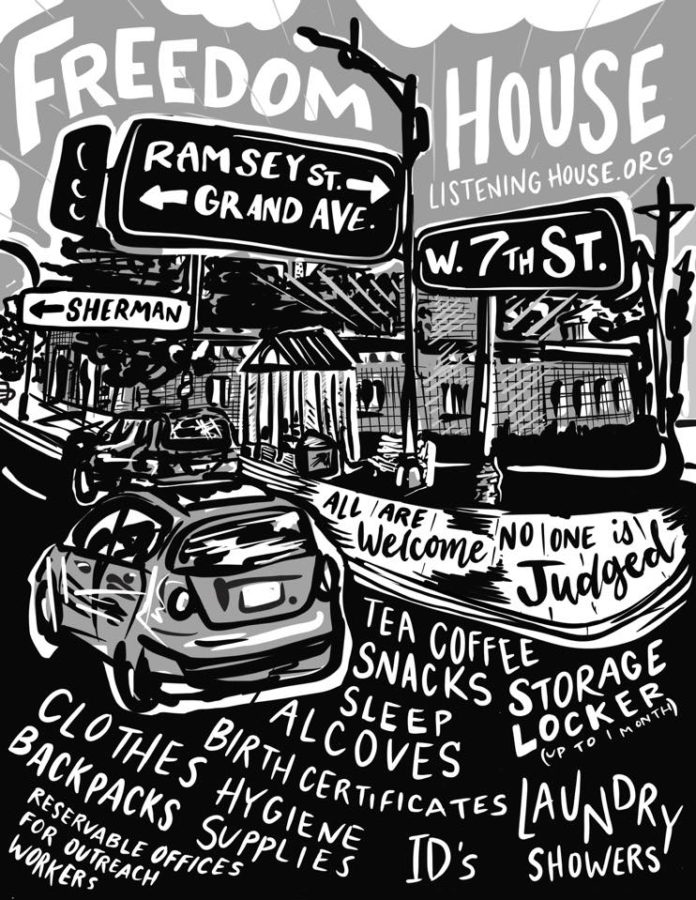 We have new neighbors in West 7th, and some are not being kind to us.
As you may know, Freedom House, a homeless services drop-in center, opened in the former fire station building at 296 West 7th St. in January. The program is operated by Listening House, a local non-profit which has been providing services to the homeless in St. Paul at various locations in and around downtown since 1983. Freedom House–like Listening House–is not a homeless shelter in the usual sense, instead focusing on daytime services, which it provides from 8:00 a.m. to 8:00 p.m, seven days a week. It offers food, bathrooms, showers, cots for daytime sleeping, donated clothing, and referral services for up to 100 people per day.  For the most part, it is a valuable and generous service.  But, as some neighbors have learned, it also draws people who engage in antisocial–and unkind–behavior.
West 7th has a long history with the homeless population. During the 60s and 70s the blocks between Kellogg and Grand, were thought of as the skid row of St. Paul. There was a large population of homeless people, some of whom were known to frequent the local bars and liquor stores. As time went on, the neighborhood changed, and United Hospitals’ parking ramps and other construction displaced those who lived on those streets. The low-end liquor businesses were replaced first by antique shops and later by upscale bars and restaurants. But homeless people maintained their presence at the important institutions in the neighborhood. For 20 year there has been a daily procession of people from Dorothy Day to the Salvation Army for breakfast. Eccentric behavior has not been out of the ordinary. But most of the residents lucky enough to live in our own homes felt no reason to complain.
Things are different with Freedom House. Everyone who lives and works on the blocks surrounding it has experienced trouble since it opened. Drug transactions, public urination and defecation, vandalism and threatening behavior have become commonplace.  Tom Reid, the owner of the eponymous Hockey City Pub, said that his customers have faced combative and assaultive people. Cars parked during the day in the old DQ lot–including my own–have been damaged. Parlour has reported dine-and-dashes. During a recent public meeting with Councilmember Noecker, the local police commander reported a spike in crime during the first four months of 2021, ranging from felonies to “quality of life” crimes.
Every business owner in the neighborhood has taken measures to increase security.  Locks have been added to previously unlocked doors in the interiors of buildings. New security guards have been hired. Exterior security cameras have been beefed up.  But the problems continue.
I took a tour of Freedom House in May to try to identify how it might be part of the solution to the problems it has magnified in the neighborhood. What I found is that the building itself is not a good fit for this type of use–without enough bathrooms or showers–but it serves its purpose. The programs it offers are worthy of support and certainly are needed.  But that need should not override the facility’s responsibility to be a good neighbor.
Freedom House’s neighbors have a right to expect that those who use its services will treat us with the same respect that we have shown to homeless neighbors for decades. This is not happening. It may be impossible for the staff to control the behavior of specific individuals, but if those bad actors are a necessary part of offering homeless services, then residents have a right to object.
Freedom House is taking steps on its own to increase security. Off-duty police are present every morning and every evening. Local ambassadors will be present during the day to keep eyes on the place and pick-up trash. But it’s clearly not enough.
Freedom House is operating under an emergency ordinance adopted by the City Council in November 2020 as part of its response to the COVID-19 crisis. A permanent amendment to the Zoning Code has been proposed which will create a new use classification known as “homeless services facility,” which would be a permitted use in the T2 (traditional neighborhood) district. Adopting this change would assure that Freedom House would become a permanent fixture in our neighborhood, without conditions. As neighbors, we have an opportunity—I would venture to say an obligation—to advocate for our interests in preserving the peace and stability of our neighborhood. We should either oppose the amendment entirely or insist on enforceable conditions that will limit the impairment of our quality of life.
We are entitled to have our new neighbors treat us with the same respect that we extend to them.
Mike Black has practiced law on West 7th Street since 1979 and has been active in various community organizations over the past forty years.