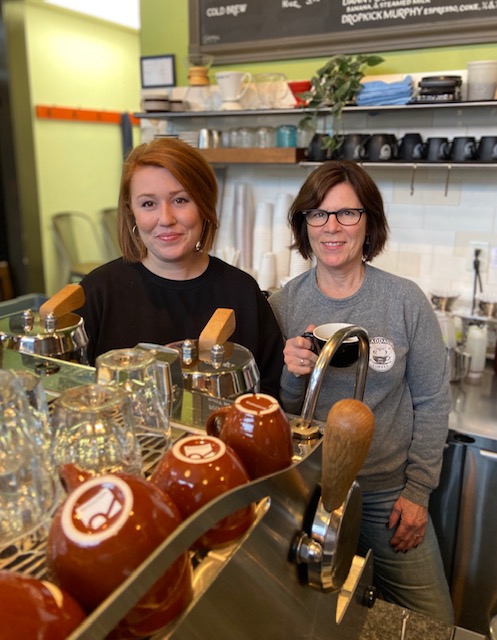 When Claddagh Coffee opened in August, 2011, it didn’t take very long for it to become one of the neighborhood’s favorite spots. Owner Mary Hogan-Bard had managed literally to bring her dream of a classic, comfortable, community coffee house — where people would meet, share, relax or work — into reality.

Claddagh’s women have always been at the creative heart of the enterprise. So, celebrating the eighth anniversary seems an appropriate time to appreciate them and see a few of them off to other chapters of their lives.

Anna Maxan was Mary’s first customer and soon started working as a barista. She was a high school senior, then went on to St. Olaf’s while working at Claddagh on weekends. After she graduated, she learned to bake from Carol Stutzke, Claddagh’s first baker and creator of many favorite recipes. Anna took over the baking along with other management tasks.

Anna then trained Ben Villano, who continues as baker. She has since moved on to her full-time profession as a software engineer. Yet, you might still see her working at Claddagh on the occasional weekend.

Ben’s sister Emily Villano, started as a barista in 2013, and soon became a manager, working in that position for six years. She is now an actor, and also teaches voice at a local studio.

As we approach 2020, Mary remains a presence at both Claddagh and Wee Claddagh, the shop she opened on Selby to bring her Irish blessings to the Ramsey Hill neighborhood. She does all the behind-the-scenes “business stuff,” and works behind the counter a day a week at each location.

Mary’s daughter, Molly Hogan-Bard, has worked at Claddagh from time to time throughout the years. Now, after graduating from St. Kate’s, spending a year in Peru and two years as manager of the Valise fashion boutique, she is taking on the role of General Manager. Like mother, like daughter.

Some changes have been made in the daily offerings: coffee and baked goods as well as small breakfast-type items are available all day. The lunch menu with sandwiches and salads has been eliminated.

On December 7, 8 a.m. to 2 p.m., a special Holiday Pop-Up with local vendors, live portrait paintings and Santa from 10 a.m. to noon, comes to the West 7thshop.

So, when you are setting up a meeting, a get-together, a reunion with an old friend, an interview, a small party, and ask “Where should we go?” don’t be surprised when the answer is “How about Claddagh?”