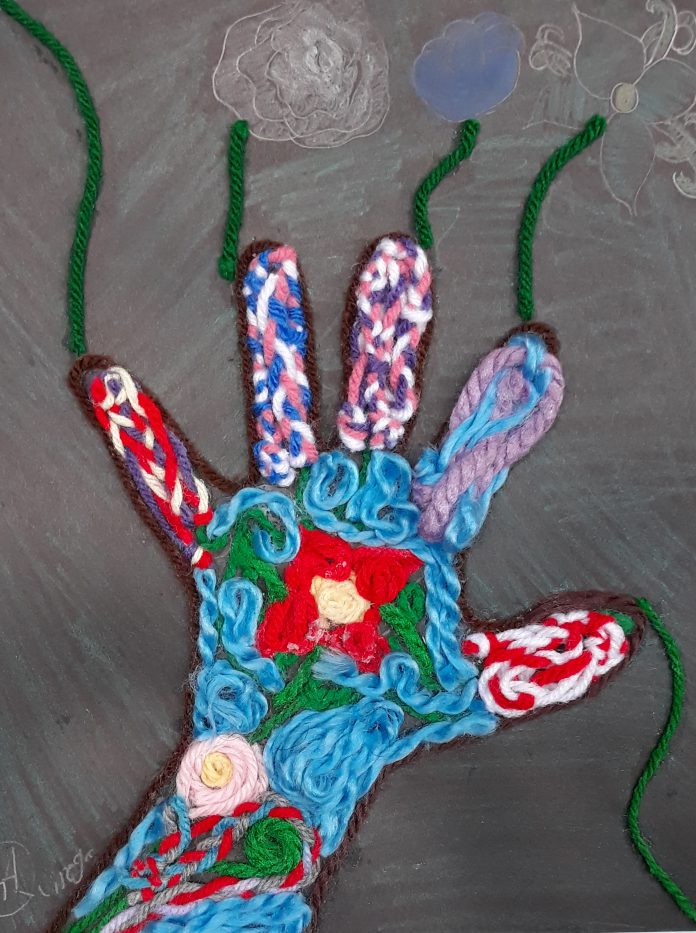 Linwood Monroe Arts Plus provides arts-infused curriculum for children pre-K through Grade 8 on its two local campuses: pre-K through Grade 4 at Linwood and Grades 5 through 8 at Monroe.
Believing that the arts play a central role in how children learn, the school has created an academic/arts partnership that enhances both the learning environment and academic performance of all students.
At Monroe, the Art History Time Line, which covers the history of art and culture since 33,000 BCE, is used to provide the context for delving into many eras and types of creativity. Three classes worked with particular themes and produced works representing the methods and materials used.
In Grade 5, the focus was on the Huichol civilization during the pre-Columbian Era. Students were free to create their own versions of Huichol Yarn Paintings.
Grade 7/8 students studied the creation/invention of the pencil — a simple yet extremely influential artifact of human history. They were free to use pencil shavings to make art in any way they could.
Grade 7/8 also learned about elements and principles of art incorporated with machine parts and animals. These parts combined to create a Steampunk Zoo.
Sam Yelk, the school’s Visual Arts Specialist, helped integrate the art produced in these classes into an exhibit that appeared at Fresh Grounds during May. The works are available for purchase: contact Sam at sam.yelk@spps.org or call the school office at 651-293-8690.The school also has specialists in theater, dance and music.
Mayson said: “In art class we created Steampunk Zoo creatures. We had the choice between plants or animals. I made a baby elephant. I made the trunk and legs look like pieces of metal and the ears and the back look like a bunch of gears. I used machine parts and a baby blue hard paper for my background.”
Justice worked in pencil shaving art: “This is where you incorporate pencil shavings into your image. We were allowed to use any part of the pencil, but I stuck with just pencil shavings. I wanted to make animals, but after my first attempt at a lion I realized that zoo animals would not work, so I decided to make a butterfly and flowers.”
Nick talked about his machine animal: “In art I drew an animal — then turned it into a robot. I drew a snake because the other machine animals I tried drawing didn’t look good. I was also confused on how to add Steampunk detail until I learned that you could just draw the animal normally, then draw gears and cogs on it. Overall, I think it turned out good with all the detail I added. Three things I would do differently would be to glue on more machine parts, add color, and draw the animal in 3-D.”