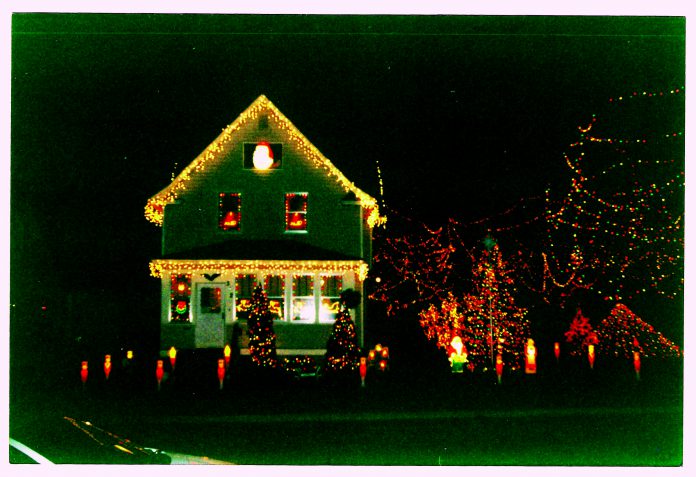 In 1990, Ray, Nancy and Mary Jo Matykiewicz planted a pine seedling in their side lot on Bay Street. That fall Ray was deployed to the Gulf as part of the 24thInfantry out of Fort Stewart, Georgia. From then on until he returned home, Mary Jo and Nancy wrapped yellow ribbons and a string of lights around the little tree and kept them on all the time.

After Ray returned, he began to decorate the house and grounds with an array of Christmas lighting that soon became a neighborhood attraction and beyond. Sisters from St. Francis would come by every year, and Ray would turn the lights on early so that students from Monroe could take some Christmas pictures by the tree. Some years there were as many as 25,000 lights in the display, and if he started at Labor Day he was likely to finish most of it by Thanksgiving to show the family.

This year, with the tree getting to be too big and too close to the house (it is well over 50 feet tall) thoughts of taking it down began. Then they learned that the Union Depot was searching for this year’s Christmas tree. They called, people came out — and chose the tree as the best in all the area. Late in November it was taken down and moved to the Depot, where for this year anyhow it carries the neighborhood tradition to the whole community.

Annual Holiday Tree Lighting at the Union Depot takes place on December 6 from 6 to 8 p.m. Starting with entertainment and holiday activities in the Waiting Room at 6 p.m. andmoving outside to the North Plaza at 6:30 p.m. for the lighting and a fireworks display. Back inside, Movie Night features Elf and concessions will be available. At 8:30 p.m. the second movie, Polar Express, will be shown. The European Christmas Market will be open on the East Plaza throughout the evening, offering unique, handmade holiday gifts and decorations from local vendors.