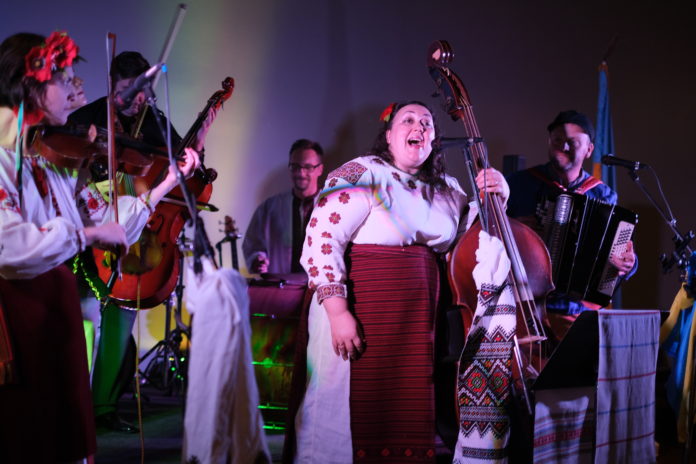 by Casey Ek
The Germanic American Institute(GAI), 301 Summit Ave., is joining a growing number of local individuals and organizations providing aid to Ukrainians in the midst of its war with Russia.
Through their latest Communities for Ukraine campaign, GAI is collecting monetary donations for Ukrainian refugees settling in Zell, Germany.
The campaign came about while GAI Board Chair Danika Hoffman was on vacation in March in the German town of about 5,000 people when Ukrainian refugees began resettling in the area. Seeing an opportunity to lend a hand Hoffman rallied GAI, which is now working to raise at least $20,000 by May 21 to assist the local government. Donations, which Zell city leaders will allocate for refugees’ living expenses, can be made at gaimn.org/calendar/ukraine.
“Many Ukrainians were forced to leave home suddenly, walking long distances, bringing only what they could carry,” Hoffman said in a letter to GAI supporters. “When we learned our friends in Zell were welcoming refugees into their community, we knew we had to help.”
Germanic-American Institute spokeswoman Bettina Dehnhard said the organization is partnering with the Minneapolis-based Ukrainian American Community Center(UACC), the Consulate General for the Federal Republic of Germany Chicago, and others to meet their fundraising goal.
Dehnhard said more Ukrainian refugees are entering Zell by the day, and GAI estimates there are over 300 in the town and its surrounding areas. Those displaced by the war in Ukraine are entering Zell through its sister city, Plonsk, Poland, by way of Ternopil, Ukraine.
Zell city leaders have been eager to welcome the newcomers, Dehnhard added, but they are now at a crossroads with how they are aiding the refugees.
“They [city leaders] have ideas, they just don’t have the funds to do all that work,” Dehnhard said.
Since Russia’s February invasion of Ukraine, UACC has activated all of its supporters to rally for Ukrainian relief. Luda Anastazievsky, a board member for UACC, is among the Minnesotans with Ukrainian roots whose lives have been turned upside down by the war. Originally from Mariupol, one of the hardest-hit cities in Ukraine in part because of its steel plant and location, Anastazievsky has not heard from several of her family members in Ukraine, leaving her to wonder if the radio silence is because of damaged infrastructure or the worst possible outcome.
“It’s been very difficult just to live a normal life,” Anastazievsky said.
Anastazievsky said this is why efforts like those of GAI and donations to UACC (which can be made at uaccmn.org/donate-2) are so important. She added that sustainable donations are what make the biggest impact because “we’re in this for the long run.”
Anastazievsky said that refugees are beginning to trickle into Minnesota. Following a March meeting with Gov. Tim Walz, she feels hopeful that the state will be prepared to welcome refugees with open arms, noting the recent influx of refugees from Afghanistan entering the Twin Cities.
“It’s hard to tell how many people would be arriving eventually,” Anastazievsky said.
The Ukrainian American Community Center and other organizations have been collecting donations through a series of concerts that feature a wide range of performers, both Ukrainian and non-Ukrainian.
One such performer is Natalie Nowytzski, whose family lives in the Kyiv and Poltava regions of Ukraine. She said Ukrainians from an early age prepare for exactly the type of Russian incursion that began in February, and much of that generational struggle has made its way into her music. She noted that multiple family members well past the military fighting age had expressed a desire to pick up arms to defend their country.
“There’s this incredible Ukrainian spirit,” Nowytski said. “That instills a lot of pride in me. That fighting spirit really comes out in me.”
For the last few months, Nowytski, whose family members have either evacuated or have otherwise been accounted for in Ukraine, has been working with musicians and local venues to launch what she is calling “Musicians for Ukraine.”
The fundraising series is including all types of musicians, but every artist must perform at least one or two Ukrainian songs in whichever genre fits the artists best. The series kicked off April 25 with Duets for Ukraine, which featured Nowytski performing alongside Scott Keever, as well as Lev & Olga and Soul Trouvère.
The series will continue on May 6 at The Dakota in downtown Minneapolis. The event will be an evening of Eastern European music and will feature music by SlovCzech, Orkestar Bez Ime, and Ukrainian Village Band. More show dates are expected to be announced at natalien.com/news. Musicians wishing to get involved can reach out at musiciansforukraine.natalien.com.
Also on the horizon is Band-aid for Ukraine on May 8 at St. Paul’s Minnesota Music Cafe, 499 Payne Ave. The event is one of many put on in partnership with Stand With Ukraine MN(standwithukrainemn.com), the central-local Ukraine crisis response team.
Germanic-American Institute is planning a reception for community partners and donors on May 21, from 5-7 p.m. on the GAI grounds. Guests will receive a food and beverage ticket redeemable for a Paulaner beer or other beverage, Kramarczuks’ bratwurst, and a variety of German and Ukrainian side dishes and desserts. Attendees will have an opportunity to be part of a video message to the Ukrainians living in Zell and write letters of support. All funds collected at the event will go to the UACC. There is a suggested donation of $30.
Dehnhard said that GAI would like to send volunteers to Zell from its community if enough people become available. Volunteers would help local leaders get living quarters ready and might paint, install appliances, or otherwise aid with daily needs.