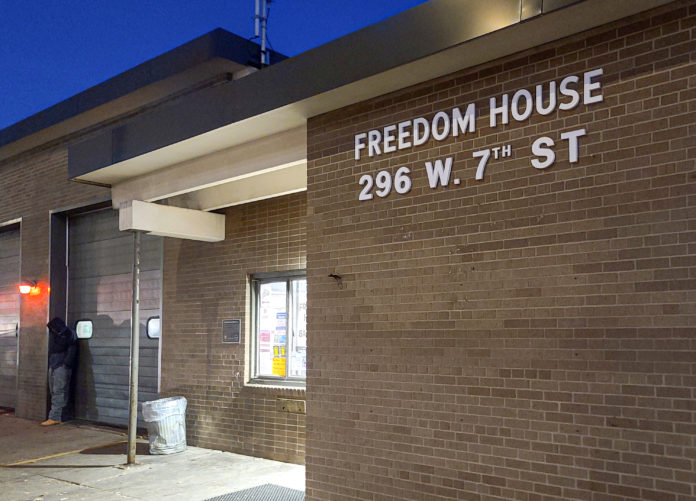 By Casey Ek, Diane Gerth
Freedom House, the homeless shelter at 296 West 7th will be closing its doors on May 8, Molly Jalma, the executive director for the Listening House, the nonprofit that operated Freedom House, confirmed.  Freedom House, which opened in January 2021 as a response to the COVID pandemic, was 18-month cooperation between Ramsey County, the City of St. Paul, the St. Paul Fire Department, St. Paul City Council, and Listening House.
In late March, Ramsey County District Judge Patrick Diamond ruled that the ordinance that allowed Freedom House to open as a day shelter was improperly enacted, thereby granting a temporary restraining order sought by the owners of Tom Reid’s Hockey Pub, Art Farm Advertising, Patrick McGovern’s Pub and other plaintiffs in a case leveled against the shelter and the City of St. Paul.
The plaintiffs’ lawyer did not respond to a request for comment, but affidavits from the plaintiffs contend that increased crime, harassment, and unsanitary acts were caused by Freedom House guests. While Diamond acknowledged that the events described, such as assaults and the presence of feces throughout the neighborhood, were disturbing and would likely cause someone to feel unsafe and anxious, he found no legal basis to connect the acts to the Freedom House.
Diamond instead gave the City of St. Paul 45 days from the March 23 ruling to undergo the proper ordinance procedure for the ordinance passed to open the shelter. The city has opted not to pursue the process, and the shelter will now close earlier than planned. The shelter’s lease on the property was scheduled to end on May 25.
Now, as shelter staff is readying to leave the space, Listening House leadership is now focused on limited lapses in care for the over 200 unhoused people they served on a daily basis.
“Our number one priority is to ensure continuity of services for Saint Paul,”Jalma said in a statement. “Listening House is working with guests, letting them know where and how to access services at our other site location on Maria Avenue inside First Lutheran Church in Dayton’s Bluff.”
Sara Fleetham, the development director for Listening House said that while the adjustment will be tough “we will continue to provide essential service for people in poverty.”
Citing statements from Fire Deputy Chief Roy Mokosso, multiple local news outlets confirmed St. Paul Fire’s plans to re-enter the Freedom House space, which they vacated 2010 in order to relocate to 1000 West 7th, just down the road.  Re-occupying the space will allow for St. Paul Fire to more readily respond to the uptick in calls coming from the downtown area. The department also reportedly wants to house their social work response unit at Freedom House.
The closure of the day shelter comes as Ramsey County is ending its lease at the Bethesda Hospital site, which was used as a separate emergency homeless shelter during the pandemic.