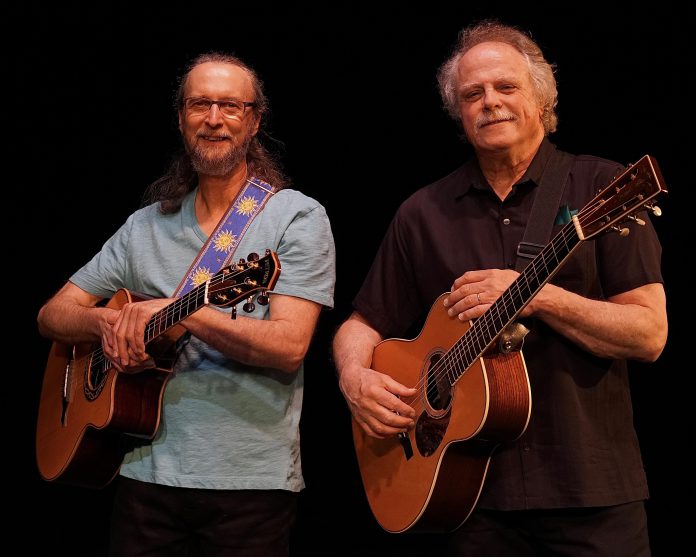 Grammy-winning guitarist Pat Donohue (Prairie Home Companion) teams up with eclectic West End guitarist Jerry Kosak to present a concert of acoustic fingerstyle and slide guitar at the historic James J. Hill House on Summit Avenue. The show takes place on Saturday, June 22 at 7:30 p.m. As a bonus, concert-goers can take a free tour of the J.J. Hill House (240 Summit Ave.) before the show. Tours begin at 6:30 p.m.
Pat Donohue’s devotion to acoustic guitar has made him an American standard, as he echoes the tones of Robert Johnson, Blind Blake, Merle Travis or Muddy Waters. Chet Atkins called Pat one of the greatest fingerpickers in the world today; Leo Kottke called his playing “haunting.” See patdonohue.com.
The solo acoustic guitar of Jerry Kosak has an intensity and expressiveness that goes beyond expectations. The sound of his guitar is immense, yet articulate. Kosak’s skill and command of the instrument is evident and his delivery of the music is honest. According to Kevin Barnes from KBEM Jazz88, “This music is a great reflection of many diﬀerent styles.” See jerrykosak.com.
Ticket information is available at tinyurl.com/y3em2btx.