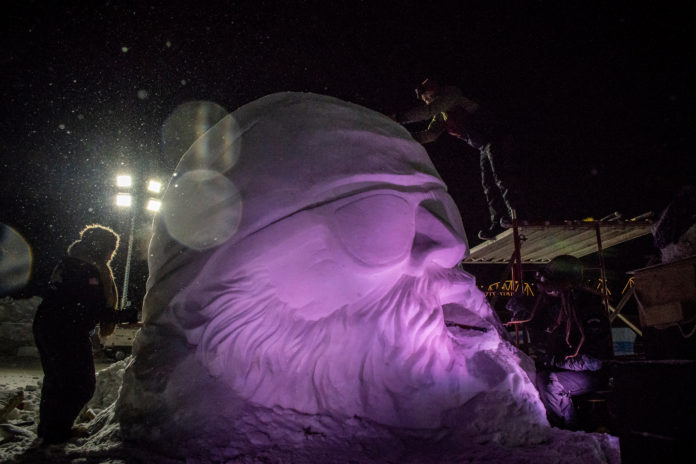 by Casey Ek
Local artist Heather Friedli is continuing to take the snow sculpting world by storm this winter with a series of competition and exhibition appearances that she says channel her Indigenous roots.
Frieldi took her talents to the 2022 World Snow Sculpting Championship in Stillwater, which wrapped up Jan. 23. She was recruited by the German teams SUBZERO and, despite a valiant effort, did not place.  Competing against her team was House of Thune, a local team headed by West 7th’s Dusty Thune. House of Thune, meanwhile did not place either.
She then took her team to the Minnesota State Snow Sculpting Competition, which is part of the St. Paul Winter Carnival. The competition held at the Minnesota State Fairgrounds was set to run from Jan. 28-30, and the results were not available in time for publication. It serves as the gateway to compete at the U.S. National Snow Sculpting Competition in Lake Geneva, Wisconsin. The first-place team at the Minnesota competition earns the right to compete.
Rounding off her tour of Minnesota is a stop in Mankato. From Feb. 3-5, she will be showcasing her talents once again for the city’s Indigenous Art Festival. The event is designed to showcase Indigenous culture of all types, bringing together artists, vendors and performances.
Anishinaabe by blood, Friedli welcomes the opportunity to share her Indigenous roots with the world. She along with teammates Maggie Thompson and Juliana Welter call themselves Team KWE, with Kwe translating to “woman” in the Anishinaabe language.
“Through team Kwe, we’re able to express through our art our love of our culture with the world,” Friedli said from within her gallery at 943 West 7th St.
Friedli got her start in snow sculpting in 2007 when she was an outdoor education teacher. In 2012, she made her first professional snow sculpture depicting Hercules fighting the Nemean Lion for the Ely Winter Festival.
Much of Friedli’s art depicts subjects in motion. In fact, she describes herself as a kinesthetic artist, meaning she involves her whole body. She might describe all snow sculptures as such given the physical demands of the medium, and in many ways, she views the physical process of sculpting as a piece of performance art in its own right.
Friedli says through this process, she is not only channeling her current environment, but also generations of history. One is likely to catch her listening to one of several history podcasts while painting in her studio. History, she says can be a gateway into healing from traumas of the past. In the case of the American Indian experience, Friedli hopes her art can lend some portion of growth to those who view it. Friedli recalls making a snow sculpture of a jingle dress dancer in a past exhibition, which is a symbol of healing for multiple American Indian cultures.
“By creating things from our culture, we’re able to bring that healing and continue to say we are still here,” she said.
“The only way you’re going to heal is to bring people together and bringing the truth to light. You have to bring it to the sunshine,” she later added.