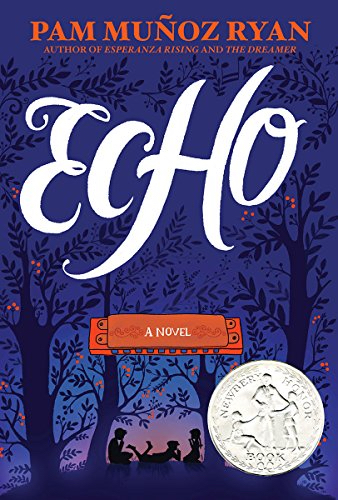 BEATRICE COSGROVE, reviewer
Echo by Pam Muñoz Ryan starts off with a story about a boy named Otto playing hide-and-seek with his friends. Then the story branches into three parts about three kids: Friedrich is a boy in Nazi-occupied Germany, Mike an orphan in America living with his brother Frankie, and Ivy a girl in California whose brother is fighting in World War II. Each of them have their own struggles but music helps all three of them hope and dream–it carries them away into a distant world. An instrument that frequently transports them into that world is a magical harmonica that enters each of their lives in surprising ways.

As these three kids go through tough times in their lives, they continue to grow. Echo is a very heartfelt book with a little bit of mystery. It was a great book to sit down in a comfortable spot and read. It is written so well that you can just about feel what the characters are feeling, and I felt their pain, their joy, their nervousness and their anticipation.