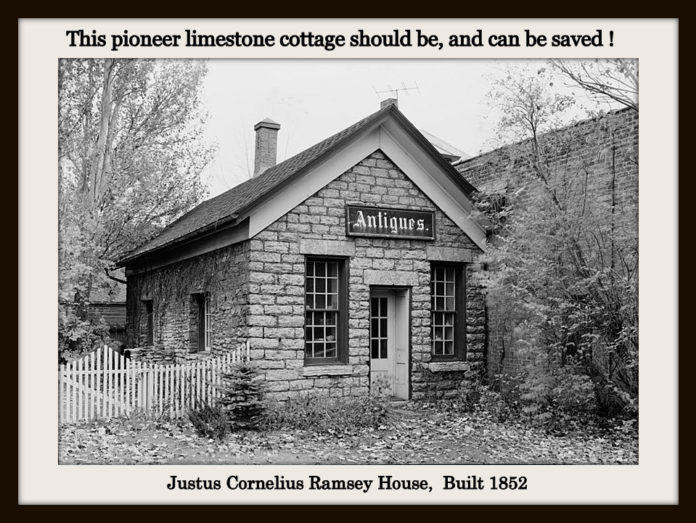 The West 7th preservation community is rallying to save the Justus Ramsey House, a small stone structure situated on the patio of Burger Moe’s. The house for neighborhood preservationists represents irreplaceable history and may soon be leveled.

The structure’s owner, Moe Sharif has applied for a demolition permit, which the Heritage Preservation Commission will review Nov. 7. The application comes after the structure partially collapsed and the building was reportedly condemned Sept. 21.The HPC will meet in the city council chambers at 3:30 p.m. Among the documents being considered are multiple reports from engineers who have examined the structure.
“The building is severely damaged, and the structural load capacity is gravely compromised throughout. Therefore, the building is judged structurally unstable and represents a ‘dangerous structure’ condition. In our opinion, based on the structural and public safety concerns, the building should be immediately demolished under the emergency provisions of the St. Paul Legislative Code and upon approval by the City,” Ronald LaMere, an engineer with the BKBM firm writes in a memo to Sharif, which will be considered at the Nov. 7 meeting.
Brian Karpen, a structural engineer with the city’s Department of Safety and Inspections wrote in a memo that he does not dispute BKBM’s findings and that the Justus Ramsey House in its current condition may be adding additional stress to the Burger Moe’s building and that a total collapse of the structure could affect nearby buildings.
However, the nature of the damage has left the community looking for answers. Macdonald and Mack Architects, a firm commissioned by the city to review the structure, believes it prudent to install vibration monitors within the house because “the observed deterioration does not correlate with natural deterioration mechanisms…” the report reads.
KSTP footage from 2015 shows the structure in perfect condition, but now the building’s walls are caving in, a large portion of the chimney is missing and at least one portion of the roof is missing, and now community members are demanding answers to the question of how the building suffered so much damage.
“We want some accountability for destroying our collective history, our cultural heritage,” local historian and longtime neighborhood preservationist, Jim Sazevich said to an impassioned crowd who gathered at Waldmann Brewery on Oct. 20, while holding the Macdonald Mack report.
The brewery, owned by fellow preservationist Tom Schroeder, played host to an informal forum at which community members could address their concerns to Ward 2 City Councilperson Rebecca Noecker. Noecker, who in 2016 helped secure a deal to save St. Paul’s Hope Engine Co. No. 3, which today is Hope Breakfast Bar, told the public she is looking into solutions but did not commit to a specific position prior to the city council’s public consideration of the matter. But when pressed by Collin Rust, chair of the Little Bohemia Neighborhood Association, if she would commit to carrying neighborhood concerns to the council, she assured the community she would.
“I will absolutely be sharing with my colleagues what I hear tonight,” Noecker said, encouraging the public to reach out to the other members of the city council as well.
Some in attendance were in favor of boycotting and picketing in front of Burger Moe’s, but that attitude was not unanimous.
Sharif did not respond to a request for comment, but multiple audience members, including local architect and preservationist John Yust, said they are not interested in vilifying Sharif and hope to work with him to find some solution to preserve the structure, including relocating it to a separate site.
As of the writing of this article, just over 1500 neighbors have signed a Change.org petition to halt the structure’s demolition.
History of the structure
The structure is listed on the National Register of historic places and the St. Paul City Council has twice designated the house, first in 2001 and then again in 2015, as a protected heritage preservation site. Schroeder helped guide the 2015 process.
The house also represents substantial history for St Paul’s African American history. Among other uses over the decades, the cottage was once home to George and Maria Perkins, who were former slaves from Kentucky and South Carolina respectively. The married couple lived and worked in St. Paul and represented a long succession of Black St. Paulites who resided in the house from the late 1890s to the 1930s.
Another such figure was Hattie Key, whose family resided in the house in the 1920s. Key worked as a maid while her daughter worked in a downtown department store.
Another figure was Lizzie Battles, who worked as a hairdresser and millinery shop owner out of a small wood frame shop built in front of the house on the same lot.
“We haven’t paid enough attention to diverse sites…,”Schroeder said of local conservation efforts. “The beautiful thing about this little cottage is that it breaks that mold.”
The house was constructed sometime before December of 1853, making it the oldest stone structure in St. Paul or Minneapolis, according to a historical account prepared by Sazevich. It was occupied by Robert A Smith, the private secretary to the then-territorial Governor Willis A. Gorman.
The name “Justus Ramsey” comes from a mid-20th century historian’s focus on land speculator Justus Cornelius Ramsey, younger brother of Gov. Alexander Ramsey, who held partial title to the area surrounding where the home was built. According to Sazevich’s account, however, there is no record that Justus Ramsey constructed or ever lived in the house.
What’s next?
Anyone may submit a written (email is acceptable) testimony/comment to the HPC. To be accepted the testimony/comment must include your full name, and address and be written to the Heritage Preservation Commission. Testimony/comments may be sent to the HPC via email askHPC@stpaul.gov. Written testimony/comments will be accepted until Friday, Nov. 4, 5 p.m.
The HPC’s Nov.7 decision can be appealed.
Noecker said that if the structure is deemed to be an emergency against public safety an order could be signed by Mayor Melvin Carter to immediately demolish the structure without a public process, but she assured the public that there is no imminent need for the structure to come down for safety reasons.
“I’ve been assured that there is no emergency,” Noecker said.