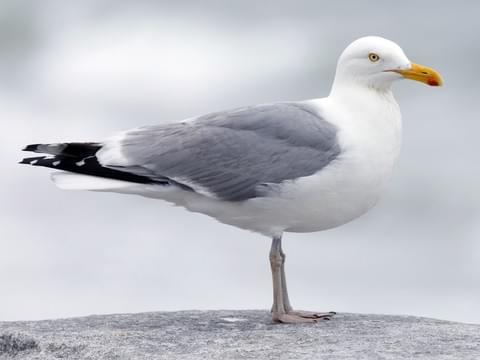 Herring gulls are residential and migratory birds. They live year-round in Grand Marais, Minnesota, on Lake Superior, roosting in the bay this winter. They are the most common water bird in the Great Lakes, save the ring-billed gull. Their wingspan is about five feet wide, they are about 25 inches long, weighing between 2 and 3 pounds. They are mostly white with grey wings and a black tail, pink legs with a yellow bill and a tiny red spot on the tip of the bill.
Gulls prefer shorelines, mudflats and beaches, but we find them foraging parking lots, landfills, and dumpsters. Inner-city gulls feed their young French fries, Dorito chips and garbage. Could they be a barometer to the health of the society we live in?
I watched this small colony of herring gulls as they came to roost around 2 p.m. I couldn’t believe they were just sitting on the ice. There was open water in the bay, but they chose a thick slurry of crackling ice near the shoreline to rest for the night. It was Valentine’s Day weekend, mind you, with air temperatures -15 below zero through the night in +34.5-degree water. Their feet are mostly tendons and bones and their blood supply has a heat exchange system that somehow warms up the blood before it goes back to the gull’s heart.
The Danish hygge over winter. So, I got in on it a bit on my trip to Grand Marais, as I hygge(d) with intention. Hygge (hoo-gah) is being in the moment in winter and not complaining about the snow, ice, cold winds, bumpy city roads, and torrent temperatures that changes over a weekend. This Danish word is hard to translate, but can be summed up as mindfulness. Enjoying the “chill” in the hearth. Taking time to be around those you love, share food with them. Linger, breathe, play games, tell stories, actually sit and listen to music. Grand Marais has a Hygge Festival every year, I caught the last weekend, February 14-16. It was grand, sunny and warm as we sat playing cribbage overlooking Lake Superior. Then headed up the mountain to the cabin for some more relaxing. I got out snowshoeing three days in a row. I broke some nice trails. Pine martens live on my friend’s property, we saw the tracks that seemed to disappear into nowhere. They like to tunnel through the snow. They are the cutest mammals ever. See dnr.state.mn.us/mammals/americanmarten.html.
Start looking for those early migrants. Leave out food and water for them. Listen for the mating songs. And sigh as the sun continues to shine a little bit longer each day.
Sprinkle native prairie flower seeds on the snow, they need the cold to germinate.
All Shall Be Well. All Shall Be Well. And All Matter of Things Shall Be Well (Julian of Norwich).
Happy Spring birding: halleofalvey@gmail.com.