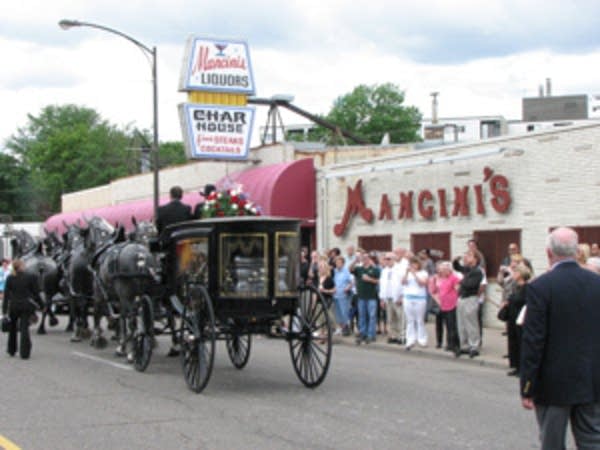 The Cost of War
The cost of war hit home in our neighborhood on Jan.uary 9, 2007, when National Guard Sgt. James M. Wosika, age 24, was killed by a bomb while on foot patrol in Fallujah, Iraq. Nearly 2000 people attended his funeral at the Cathedral, which was covered on the front page of the February 2007 issue of the Community Reporter. Attendees included Gov. Tim Pawlenty, Mayor Chris Coleman, Rep. Betty McCollum, and numerous classmates from Wosika’s Highland Park Senior High class. Archbishop Harry Flynn presided at the funeral mass.
Jim Wosika was remembered as a hero by the men under his command on the day he was killed. One of them, Sgt Jon Goldstein wrote, “The only reason I am here today to write this is because of your heroic actions on that patrol.” Wosika was leading a patrol when he became suspicious of a vehicle on the side of the road and ordered his men to stay back. As he approached the vehicle to investigate, the bomb went off. Sgt Goldstein continued, “I would gladly change places with you in a second, but we both know that you wouldn’t have any of that. That’s what defines you as a hero to me. Your leadership, your strong will and your genuine caring for your men. I will miss you and think of you all my days.”
A plaque honoring Wosika is installed at the base of the flagpole at Palace Community Center.

Passing of a Neighborhood Icon
Restauranteur Nick Mancini was a larger-than-life figure in the West 7th neighborhood and his funeral on June 5, 2007, was a grand affair that he no doubt would have enjoyed. The headline of the July 2007 issue of the Community Reporter read “A Fond Farewell” and” and the accompanying story recounted his funeral at the Church of the Assumption. A picture showed the procession that followed his casket, which rode in an antique hearse “pulled by six beautiful charcoal-grey Percheron horses,” the story read.
The story included a timeline of Nick’s life, where readers learned that the man who came to be known as “Mr. Hospitality” was born in St. Paul’s Little Italy on the Upper Levee in 1926. He later moved with his family to a house at 165 McBoal St., which still stands. (Editor’s note: The restoration of 165 McBoal was featured in the October 2019 issue of the Community Reporter.) Nick attended Monroe High School, served in the Army at the end of World War II and founded the restaurant that bears his name in 1948. The story also noted that the restaurant was the Community Reporter’s first advertiser, a tradition that Mancini’s Char House carries on to this day.
Nick Mancini was well known for giving back to the neighborhood and the story noted that “Sons Pat and John have taken to heart their father’s tradition of hospitality by serving steak dinners to thousands of National Guard troops serving in Afghanistan and Iraq.” We like to think that Jim Wosika might have enjoyed one of those dinners from home before that fateful day in Fallujah.

2008 RNC Comes to the Xcel Center
Anyone’s political preferences aside, it was a very big deal when St. Paul’s Xcel Energy Center was chosen as the location of the Republican National Convention in the summer of 2008. Restaurants and bars downtown and along West 7th prepared for crowds of delegates as well as journalists from around the world. Their hopes were disappointed, however, by a heavy security presence and by the fact that most conventioneers were bussed to their hotels in Minneapolis immediately after each day’s business was concluded. “West 7th Business ‘A Disaster’ During the RNC” read the headline in the October 2008 Community Reporter. “Many restaurants had added staff, bought extra goods, and extended hours for nothing,” said the front-page story.” A handful of businesses did well. “Law enforcement wanted to be caffeinated,” said an employee from the Caribou Coffee on Shepard Road. Yet most shared the experience of Pat Mancini, who said, “It was a disaster for businesses. We embraced it for the city [but] West Seventh was turned into a security zone.”
That heavy security presence also produced some truly frightening tales of people running from tear gas fired by police in an apparent overreaction to a generally peaceful protest near the Xcel Center. “No one was hurt, no windows smashed,” wrote contributing editor Maxine McCormick. “But at the end of the march, the police launched tear gas to disperse a few hundred of the lingering crowd.”
McCormick vividly described her own experience. “The smoke stung my eyes and I could barely see. I walked on. Bang, another [tear gas cannister] landed three feet from me, my eyes began to flood with tears.” McCormick made it home safely that night, but “felt a terror inside me that had never been there before.” She added, “Although ten people were arrested that evening, no crime was committed or reported as such. … I fear the loss of our freedoms.”
Our quiet St. Paul neighborhood can often seem removed from the events of the world. But when those events affect us directly, we at the Community Reporter try to report on them objectively and share those experiences with our readers.
A lifelong St. Paulite, Paul Bard has served on the board of the Community Reporter since 2017.