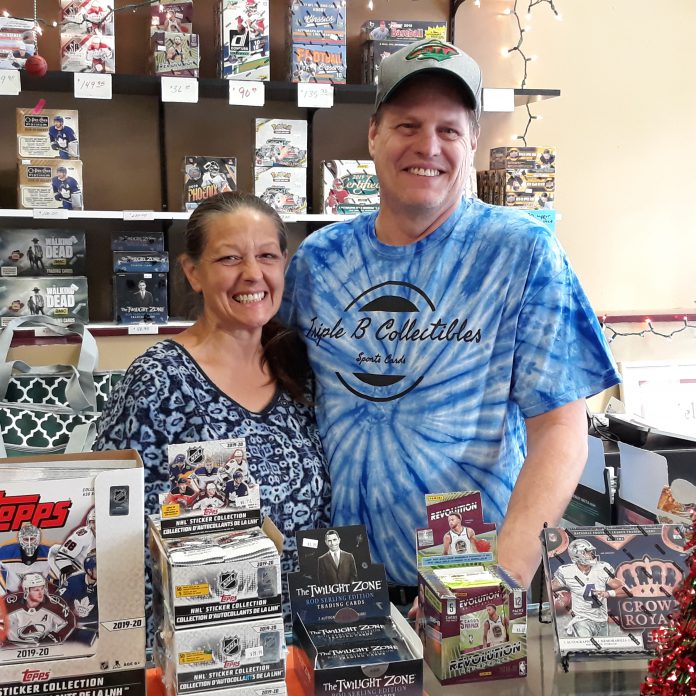 Trever and Darlene Newcomb Bergman have arrived with a flourish, opening Triple B Collectibles a few months ago. The shop is just a few blocks from their home.

Trever grew up in Minneapolis and worked at LUV Painting (owned by his dad) and eventually ran the company until about ten years ago. He had been a sports card collector early on, and around 2015, as he learned more about the modern world of card dealing and trading, he “got the card bug again” and decided he would go into the business himself. Darlene grew up in the West End (Adams, Monroe, Highland), and has lived in St. Paul all her life. She collected Wacky Packs, Topps’ series of cards and stickers that imitated consumer product logos and packaging.

Starting to trade on line, Trever learned about “box breaking” and other sales possibilities. As he became more comfortable and proficient, he also began to gain in reputation and status. Last fall he was certified as a Diamond Dealerfor Upper Deck, one of the four major card manufacturers. He is listed on their site, and receives their new products as they are issued, giving him a head-start with collectors.

People buy these products as both collectors and traders — it is a surprisingly big business. A site called Beckett is like the Kelly Blue Book for cars, reporting market values via their “Beckett Sports Card Price Guide.”

Trever has a loyal base of on-line customers, but it was important to have a physical retail outlet. This enables him to buy new products immediately (there’s a six-month wait for on-line only dealers) and to receive distributor pricing.

He has stocked the store with a comprehensive mix of sports and entertainment cards, comic books, Star Wars, DC Wobbles and other collectible figures, t-shirts and collectors’ supplies. The business is becoming more sophisticated, now featuring limited edition, numbered cards, making it possible for the market to develop real values.

Trever and Darlene would love to welcome you to their world of collectibles.