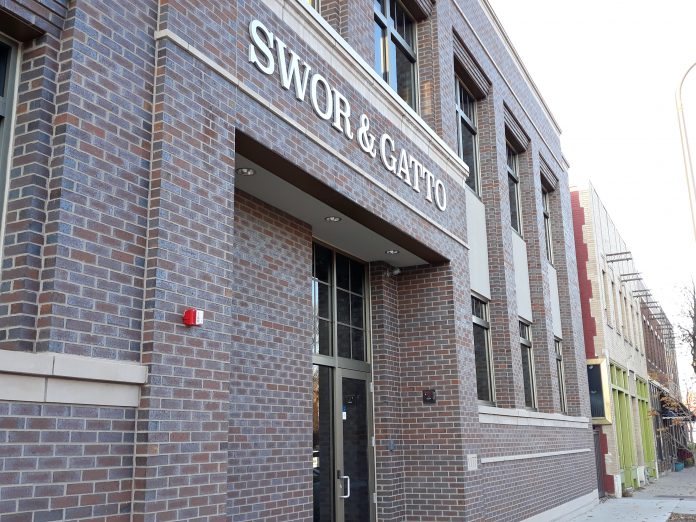 It is not often these days we find a newly constructed office block echoing, supporting and honoring the creations we consider “heritage.” A wonderful exception for the neighborhood is Swor & Gatto’s new office at 1177 West Seventh.

Paul Gatto, founder and senior partner, grew up on the East Side, but his uncle lived here — behind the old Armstrong Tire Company (now Bad Weather Brewery) — and he spent a lot of time here with his many cousins. He attended St. Stan’s School for a time, he worked for a lawyer on West Seventh while in law school.

The firm today consists of Paul and his son Marcus. When they decided to build their own offices, after renting for years downtown, the West End called, though they could have gone anywhere. Paul’s feeling of coming home was important, and both agreed in the chance to invest in what they consider a Renaissance in the West End and to become part of the neighborhood.

After they found a lot that seemed perfect, their next step was to gain an overview of the city’s rules, find the right architect and work to design and build. Some of the city’s requirements promised to be costly and complicated — a storm sewer connection via a 40-foot excavation; paving the alley; developing a parking lot behind the building site. They were committed, and moved ahead, believing that these infrastructure improvements were ultimately good for the community.Architect Bruce Schmitt was hired based on his portfolio of distinguished designs. He and the Gattos agreed that the building would be a match and a tribute to West End history. R. G. Ryan Companies would be the general contractors. Bruce chose an eclectic design that emphasizes traditional detail and is designed to blend into the neighborhood. Darker brick was chosen to harmonize with the adjacent older buildings. The building’s lines and proportions convey a sense of its solidity.

The Gattos chose Bruce Schmitt as an artist-architect who could share their vision of a timeless, classical look that also fit the neighborhood’s historical visual standards, then allowed him to follow his creative process.

As the design evolved, plans for furniture, art work and plants were important for creating the working environment they wanted. Swor and Gatto is a personal injury law practice, founded by Paul Gatto and Michael Swor (now retired). They had started their careers as insurance adjustors and evolved to accidents, medical malpractice and negligence cases, and other forms of personal liability. Marcus worked in nonprofit, public benefits and immigration law. Most of their present work deals with motor vehicle accidents.

They asked whether their building would contribute to preserving the neighborhood, because “West Seventh is an important corridor serving parts of Old St. Paul that have survived and in many cases are thriving again.”

The results speak for themselves.