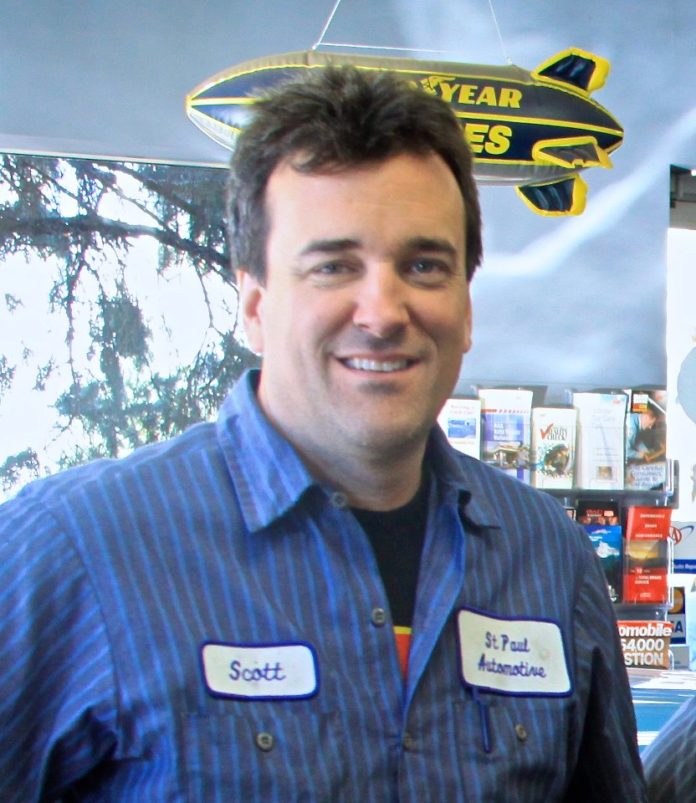 by Jerry Rothstein
Scott Andrew McClure was born on June 25, 1968, to Georgann Warren McClure and Norman Donald McClure (d. 2019). He was the “little brother” to sister Christine Susan McClure, who was two years older. The family lived in St. Paul, where the children attended Randolph Heights Elementary School, later Ramsey Junior High School, and finally Highland Park High School, from which Scott graduated in 1986. He passed away at the age of 53 on May 13.
His lifelong fascination with trucks, cars, and anything automotive began when Scott was very young. Sandbox machinery and trucks gave way in high school to a part-time job working for Olsen’s Randolph Station, where he was mentored, but to a great degree, self-taught as an auto mechanic. His uncanny ability to diagnose a problem and his passion for detail quickly marked Scott as a “gifted mechanic” (Highland Villager).
An eminently practical fellow, Scott turned his hard-earned paychecks into a property in Afton, Minnesota, and subsequently into a self-designed home. He only needed someone to share it with, and on Aug. 25, 2001, he married the love of his life, Deb Peterson, and the two of them began growing their family, with son Michael and daughter Danielle.
Scott had one more dream to fulfill: He purchased Olsen’s, and built St. Paul Automotive, a state-of-the-art repair shop, where he could practice his passion and build a loyal client base and stellar reputation through excellence in service. Everyone who walked in the door knew Scott, and also knew that no matter which of the shop’s service staff would fix their car, the job would have Scott’s watchful eye and stamp of excellence.
Scott’s community activities were well-known. For years, Scott and St. Paul Automotive hosted the North Star Camaro Club and the Frozen North LX Car Club. Those proud car owners would drive in and display their customized cars in the shop parking lot and would enjoy food, refreshments, and each other’s cars. Scott had one of the few chassis dynamometers in the area used to measure the engine horsepower and torque. He would alert the neighbors that on a certain Saturday morning it was going to be noisy!
For a few years, Scott helped at nearby Monroe Technical School going over the curriculum for future engine mechanics courses.
The Sisters of Carondelet near St. Catherine’s College often brought their cars in for tender loving care. One sister even entrusted Scott to care for her three-wheeled motorcycle. “What a good boy you raised,” they would tell Scott’s mom, Georgann (who has helped at the shop a few hours a week since “retiring” 11 years ago).
St. Paul Automotive is one of family involvement. Scott’s dad, Norman, would stop by a few times a week and do lawn and yard work on the shop property (while Norm’s dog, Rocky – familiar to many customers would “guard the car”).
Scott through St. Paul Automotive donated many gift certificates for oil changes to community churches and other nonprofits for their fundraising and supported the Community Reporter with monthly advertising. As a member of the BNI [Business Network International] Highlanders Chapter, he supported other community businesses in their efforts.
His accomplishments with St. Paul Automotive will live on under that name with new owner Dan Sjolseth.
Scott leaves behind an enduring legacy through his family, his business, and his friends. He is greatly missed.